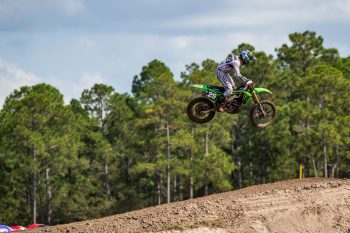 Monster Energy Pro Circuit Kawasaki’s Cameron McAdoo returned to the top 10 on Saturday after a solid 9-8 ride placed him seventh overall at WW Ranch for the Florida National. Pro Motocross’ Round 7 was much warmer than last week, but thankfully not like 2019’s triple-digit stop. Mitchell Harrison was running right on the top-10 bubble, though a tough second moto pushed him to 13th overall on 11-16 moto scores.

Following a hard get off last weekend, McAdoo was happy to get back on the bike and out on the track. He didn’t get the start he was looking for in Moto 1, coming around the first lap in 16th. With multiple lines and a good number of places to make passes, McAdoo quickly moved forward. By Lap 7, he was into ninth where he would cross the finish at the end of the race.

In Moto 2, McAdoo perfected his start and came around in fourth. He did what he could to hold on and finished the race in eighth. His 9-8 placed him seventh overall, his fourth top-10 of the season.

“It was a good day overall,” said McAdoo. “The track had a lot of tricky spots and you had to really be on your game the whole time. It was a nice surprise to see the 9-8 was seventh overall, but I really want to put the team closer to the top. We’ll keep working to close out the season with some good racing.”

The day was a little tougher for Harrison who showed speed but wasn’t able to reflect it in his results. He started 10th in the opening moto and would battle to keep the spot, eventually finishing 11th to start the day. When Moto 2 came around he started again in the top 10 and was maintaining but had an issue at the end of the race that sent him back to 16th to finish up the day. He finished out the day 13th overall with his 11-16 scores.

“My goal is to stay in the top 10 and I wasn’t able to do that this weekend,” said Harrison. “I felt like I had the speed to be able to be up there with those guys but couldn’t make the moves I wanted to. I’m already pumped to get to Thunder Valley to bounce back and put my Kawasaki KX250 back in the top 10.”