Defending three-time champion indicates level has been raised in 2020. 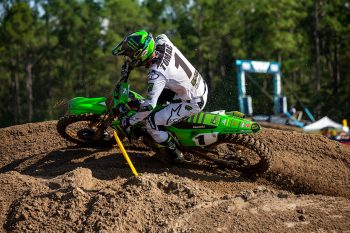 Fresh from winning a first Monster Energy Supercross crown, Tomac has been unable to find the form that took him to the past three outdoor titles so far in 2020.

An inspired effort in Jacksonville’s second moto saw him chase down current points-leader Zach Osborne (Rockstar Energy Husqvarna) on his way to second position, which earned him third overall for the round. He was sixth in moto one.

“There was no changes between one and two – I don’t know what was going on,” Tomac admitted in Saturday evening’s post-race press conference. “All I can say is that the level has been elevated, for sure.

“There’s a couple more guys in there now and it’s hard to point the finger at one thing. I mean, I was in a bit of a rough place there and I wasn’t able to figure it out for a few races there, so nice to know that I could somewhat get to the front again.”

The Monster Energy Kawasaki rider has taken confidence from his result in the second moto, which was his best finish since the opening moto at RedBud 2. Tomac’s lone overall and moto win of the season came at Ironman’s third round.

“That was big for us, the second moto there,” he declared, now P4 in points. “The first moto was what I’ve been going through these past few races, which is kind of getting behind at the get-go and not being able to push forward at all.

“Moto two, much better that way, much better riding and I felt better. It’s just been a… little bit of a funk. So, like I said, moto two was a lot more like it.”