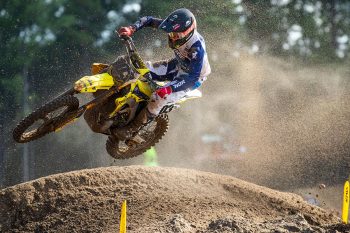 British standout Max Anstie has detailed his line through the split section in Jacksonville that almost resulted in a protest after he stormed to fourth in 450MX moto two on Saturday.

The Twisted Tea HEP Motorsports Suzuki rider encountered trouble early in moto one on his way to 13th, but a top-five result in the second outing proved his strengths at the WW Motocross Park.

Anstie was going straight through the right-left split lanes throughout the moto and making up time, which prompted some to question the legality of that approach. MX Sports Pro Racing officials later clarified that there was no issue in the line and indicated that additional riders had used it at times.

“They liked my line, didn’t they… around the split section [laughs],” Anstie said. “No, I don’t know. When I came in, they were all saying that Honda or whoever it was – I actually don’t even know who it was – were saying that what I was doing, they were trying to protest me, get me disqualified for that line.

“And then Davey Coombs came over and Jeff [Canfield], the guy that does the rider’s meeting, he said it was all fine. There was no banners there, I didn’t even think about it, there’s no markers there. In Millville, everyone went down the hill, inside across that split section anyway. I just figured more guys would catch onto it because I was just making my life a little bit easier.”

Anstie was the first of three Suzukis to finish inside the top 10 over the weekend, claiming seventh overall ahead of JGRMX Yoshimura Suzuki Factory Racing teammates Fredrik Noren and Joey Savatgy in eighth and ninth positions. He’s now moved to 10th in Lucas Oil Pro Motocross ahead of Thunder Valley.