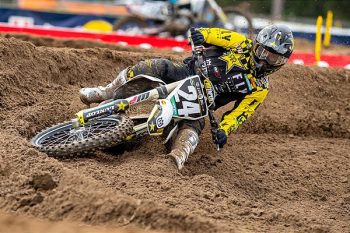 ROCKSTAR ENERGY HUSQVARNA FACTORY RACING TEAM NOW HEADS WEST TO WRAP UP FINAL TWO ROUNDS OF 2020 CHAMPIONSHIP
Rockstar Energy Husqvarna Factory Racing Team’s Zach Osborne came into Saturday’s WW Ranch National with vengeance after a tough go last weekend, and he made the most of his championship opportunity as he picked up the daily maximum of 50 points toward the 2020 AMA 450MX Championship with a flawless 1-1 performance in Jacksonville, Florida.

He started the day off fast by claiming the second-place qualifying position to set himself up for a great start in Moto 1, where he battled inside the top-three early on. With five laps to go, Osborne clicked it up a few notches to charge from third to first with two statement passes on the same lap and he finished strong with the moto-win. In Moto 2, he got off to a sixth-place start but in true fashion he continued to generate momentum climbing from fourth to first by the halfway mark. Osborne dug deep to fend off two hard-charging riders in the final laps to put an exclamation point on an unrivaled performance at Round 7. With two rounds remaining, Osborne now extends his lead to 29 points as he continues to fight for a career-first 450MX title this season.

“It was a solid weekend going 1-1 for the overall,” Osborne said. “I was able to extend my cushion again in the points so it was exactly what we needed for the stretch run of this championship. I’m looking forward to the last two rounds and finishing it off.”

Teammates Jason Anderson and Dean Wilson will miss the remainder of the 2020 AMA Pro Motocross Championship as both riders continue to recover from recent injuries.

250MX
RJ Hampshire got off to a great start in Moto 1, where he battled from the second-place position early on. He mixed it up with the front-runners for a majority of the race, swapping positions inside the top-four several times in the first 13 laps. With three laps to go, Hampshire engaged in a late charge for second-place but he caught a rock off the face of a jump and it took him down hard, leaving him unable to finish the final few laps of the race. Bruised and battered, Hampshire bounced back in Moto 2 to salvage a sixth-place finish after battling for a top-five position most of the race. With 35-6 moto scores, he ultimately took home 12th overall for the day.

“Today was tough,” Hampshire said. “I was coming in injured [hip] and I didn’t ride all week so I tightened up in the first moto. I was able to put a late-race charge but I caught a rock off the biggest jump out there and it really scared me. I’m lucky enough to walk away with pretty much minor aches and pains but I’m sure I’ll be feeling it later. I salvaged what I could in the second moto and I’m ready to re-group and get back on the box next weekend.”

Team rider Jalek Swoll had an early ending to his day after separating his shoulder while battling for a top-10 position during the first 250MX moto. Now an ongoing occurrence, Swoll and the team made the decision for him to sit out the second moto.

Stilez Robertson was sidelined once again this weekend after hitting his head during qualifying at the previous round. The team will continue to assess his condition for the remaining two rounds.