Ferrandis, Cooper bring the heat with a 1-2 finish in Florida 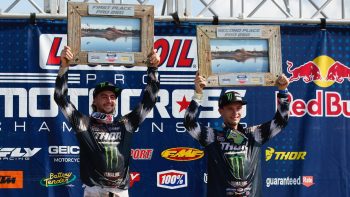 Monster Energy Star Yamaha Racing’s Dylan Ferrandis set a blistering pace to win both motos at the WW Ranch National and expand his points lead in the Lucas Oil Pro Motocross 250MX Championship. His teammate Justin Cooper joined him on the podium with two solid moto finishes (4-2) for second overall. Shane McElrath battled through the challenging conditions to take a top-five with a 7-4 result. In just his second race, Jarrett Frye put in a good showing with a pair of 12-place finishes for 11th overall.

A combination of a very physically demanding track and the hot, humid Central Florida weather put riders to the test on Saturday. With time running out in the title chase, Ferrandis came out swinging. The Frenchman got a great launch from the number one gate pick, but his teammate McElrath just edged him out of the holeshot. In third, Ferrandis made the move for second and then shortly after passed his teammate. He then put the hammer down and built a comfortable gap to cross the line nearly 10 seconds clear of the competition.

In the second moto, Ferrandis got off to another good start behind his teammate Cooper, who earned the holeshot this time, and then quickly made his move to lead. The back-to-back 250SX West Champion put on another masterclass performance to sweep the weekend for his second-straight overall win. Ferrandis’ perfect weekend in Jacksonville expanded his lead in the championship to 10 points with four races remaining.

Cooper qualified second and in the first moto he got off to a decent start in sixth. He kept pushing and passed his teammate McElrath for fifth before they reached the halfway mark. With a few laps remaining, he advanced to fourth after a rider up front crashed out of the race. The second moto went even better with the holeshot. After Ferrandis passed him, Cooper put in some consistent times to secure a comfortable runner-up finish and second overall for his best result of the season.

The first moto got off to a great start with McElrath grabbing his fifth holeshot of the season. He led the first lap and tried to check out but he had multiple riders in hot pursuit, including Ferrandis. McElrath struggled to find his comfort zone in the challenging conditions and ultimately finished seventh. Undeterred, McElrath came back stronger in the second moto and made his way to third behind his two teammates. With less than 10 minutes remaining, the North Carolinian was under pressure from Ferrandis’ championship rival. McElrath held him off until the final laps, getting passed in front of the mechanics’ area and crossing the line fourth for fifth overall.

Frye continued to make progress in his second professional race. He got a decent start in 14th and ran a solid race to finish 12th. In the second moto, Frye had a technical issue that delayed his start. All the way in last place, the 19-year-old regrouped and fought his way through the pack to another 12th-place finish, ending the day 11th overall.

The Monster Energy Star Yamaha Racing team heads west to Lakewood, Colorado, for the penultimate round of the Lucas Oil Pro Motocross Championship at the Thunder Valley Motocross Park, on Saturday, October 3.

“It was a great day for the team, especially the second moto. We were pretty close to sweeping the podium there with Dylan, Justin, and Shane. Dylan gained 10 more points in the championship which is important right now. I think his confidence from last weekend really showed today. I’m proud of all the guys. Everyone, including Jarrett. It was a strong effort from him, too. In the second moto, he started late and was dead last for a while. He crashed mid-moto and then got back up to 12th. I’m looking forward to the next one in Colorado.”

“We already knew that this race is one of the hardest of the circuit with the heat and humidity here in Florida. So every year you have to manage your energy more than giving everything you have. I got two good starts, and that helped a lot. From there I just tried to control the race. It worked really well. The team and I, we changed some stuff on the bike to improve my start and it worked. So that’s good news. I’ve made a small gap in the championship which is really, really good with two rounds to go. We’ll see how it goes. I’m in great shape. I think winning the Florida round shows that. Let’s go!”

“Once again, it was really hot here. I knew it was going to be hot coming in. I was at the track yesterday, so I kind of got to feel the heat here. It was just a good, solid day. We had a better first moto and an even better second moto. I knew I had second overall if I beat Jeremy (Martin), so that was the goal. Dylan was riding really well today. He got past me pretty early in the first moto and I tried to latch onto him. From there, I just tried to ride my laps and focus on myself. Overall, it was a really good day. I’m proud to put it back on the podium.”

“It was tough. It was a hot day today and the track was really rough. I’m not happy with my first moto. I started out front and ended up going back to eighth at one point and then somebody went down, so I ended up seventh. I just didn’t ride very well. I didn’t feel very good at all. The sand here, it’s pretty tough to ride in. My second moto was better though. It felt harder, but I just rode better and ended up fourth. I’m going to take what I got and use it for motivation for next weekend.”

“It was really hot today and the track was rough, so it definitely made it tough. The first moto I got a decent start and ended up 12th, but then the second moto I had an issue at the start and I missed the gate. I fought my way back and ended up 12th again. It was a decent day, but I want better.”