A day to remember from Rockstar Energy Husqvarna 450MX charger. 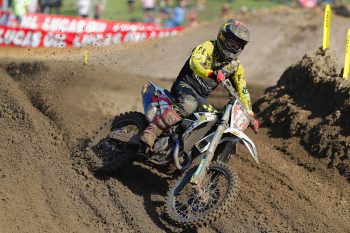 450MX red plate-holder Zach Osborne has captured the most critical win of his Lucas Oil Pro Motocross career at WW Ranch with a spectacular 1-1 result.

A convincing effort from Osborne in the opening 450MX moto saw him strike in the final five minutes, moving by both Chase Sexton (Team Honda HRC) and Adam Cianciarulo (Monster Energy Kawasaki) to go on and win by 2.733s.

It was Cianciarulo and Sexton who were up front throughout much of the moto, with the latter applying pressure and attempting a pass at halfway, but Cianciarulo remained composed.

Few anticipated the attack of Osborne, however, elevating his pace and going on to make a statement with the win over the rookie, Cianciarulo and a late move from Marvin Musquin (Red Bull KTM) saw him take Sexton – who appeared to go down on the final lap – for P3 despite a heavy practice crash earlier.

Osborne made it a perfect round in Jacksonville by getting out front by halfway and winning with a 4.201s margin, but not before he had to fend off a late surge from defending champion Tomac.

It was initially Cianciarulo who led the way until he and Musquin made contact, which allowed the Frenchman to take his turn at the front. It was soon Osborne who charged past, however, and that is where he would remain in a brilliant way to bounce back from his troubles of a week ago.

Behind Osborne and Tomac, Musquin settled into third position, in front of Max Anstie (HEP Motorsports Suzuki), Sexton, Baggett, Cianciarulo, Noren, Savatgy and Craig. After a strong start, Barcia went down while in P2 on the opening lap, forced to pit for repairs and eventually working his way back into the points for 13th.

The overall podium saw Osborne joined by Musquin and Tomac, which has allowed Osborne to stretch his series lead out to 29 points over Cianciarulo – fourth today – and another point in front of Musquin with two rounds left to run.

Next on the schedule is the Thunder Valley national in Colorado, next Saturday, 3 October, for the penultimate round of the 2020 Lucas Oil Pro Motocross Championship. 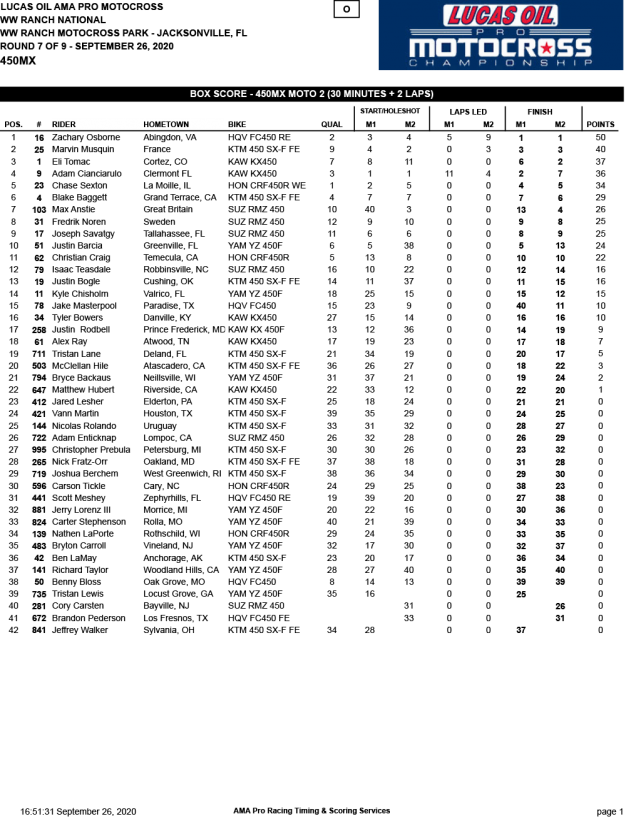