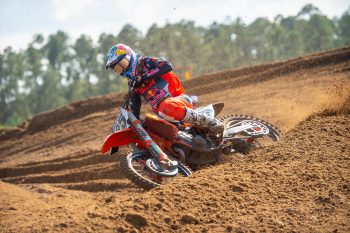 JACKSONVILLE, Fla. – Red Bull KTM Factory Racing Team’s Marvin Musquin fought through a tough start to the WW Ranch AMA Pro Motocross National on Saturday to come away with an impressive second overall after scoring a pair of consistent 3-3 moto finishes at the seventh round.

Musquin, who came into the weekend already banged up from a big get-off at the previous round, suffered another brutal crash during the morning’s second qualifying session that gave him lasting effects heading into the motos. The Frenchmen was able to shake it off as the gate dropped for Moto 1 and he settled into a fourth-place start early on. He kept his KTM 450 SX-F FACTORY EDITION within podium contention all race long, where he capitalized on a mistake by the rider ahead to ultimately secure a third-place finish in the first moto.

In Moto 2, he had a great jump off the line to narrowly miss the holeshot as he rounded the first turn inside the top three before overtaking second early on. He chipped away at the gap out front before making a charge into the lead on lap five. Racing side-by-side with the leader of Adam Cianciarulo, Musquin came from the outside to settle into the main line but both riders came together in the rut and Cianciarulo went down, leaving Musquin to assume the lead on lap five. Just after the halfway point, Musquin was joined in battle up front by points leader Zach Osborne and defending champion Eli Tomac. Despite his best effort in the final laps, Musquin wasn’t able to hold them off for the win but he still finished strong on the podium in third.

Marvin Musquin: “I came into this race not very well, physically, from my crash in Millville last weekend and then I had another crash in the second practice, so I went out there in not-so-great of shape but I gave my best and I’m happy with how I rode and my consistency. It’s a bummer that I lost 10 points on Zach [Osborne] in the championship but he was stronger than me today. I did what I could, so I’m happy to still be up on the podium.”