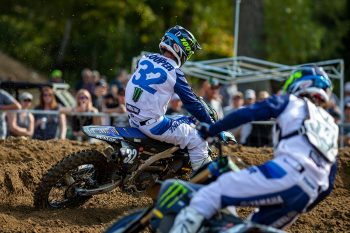 It’s been indicated to Justin Cooper that he will take on team leader status at Monster Energy Star Racing Yamaha in 2021, carrying the expectations of delivering championships in what will be his fourth year in the 250 division.

Cooper, 23, has finished runner-up in 250SX for the past two seasons, as well as taking third outdoors in 2018 and 2019 with a handful of wins, but will carry added pressure when Dylan Ferrandis transfers to 450s next year.

“I’ve already been told that, ‘hey, you’re going to be the guy in the next year, so you’re going to have all the pressure’,” Cooper confirmed. “I’m going to have to adapt to that and it’s obviously who I want to be for the team. I know that’s coming, but lets be honest, I’ve had really fast teammates and as I’ve become a veteran in this 250 class, I’ve always had my teammates doing all the winning.

“I have gotten a few wins here and there, but next year all eyes are going to be on me for the team, I feel, and I’m going to have to deliver. That’s the goal, that’s what I’m preparing for and I’m excited for it. It is definitely an experience thing, you do learn year in and year out, but the effort never changes – it’s still all you’ve got That’s just how this sport works and it’s never going to be handed to you easy.”

After winning Anaheim 1 and being in the hunt through the opening six rounds of Monster Energy Supercross, Cooper crashed directly before the Salt Lake City rounds and wasn’t able to contend from that point, but still made it a Yamaha 1-2 behind two-time champion Ferrandis in the western regional standings.

Another incident saw Cooper fracture his hand directly following Supercross, which affected his preparations for Lucas Oil Pro Motocross, in which he currently sits sixth overall in entering WW Motocross Park this Saturday in Florida. Last month it was confirmed that he had signed a contract extension to remain at Star Racing through 2021.