The gates are down on new bike season and after months of rumors and speculation, the curtain has finally dropped on the all-new 2021 Honda CRF450R and the newest generation CRF sees the first major overhaul since its predecessor in 2017.

The fifth rendition of this red ride saw notable revisions in 2018, 2019 and 2020, however, from a first take on the 2021 model it’s easy to notice a host of changes. Bright red plastics cover the machine’s redesigned frame and single-sided exhaust system. The sleek lines and flowing body panels look to be style cues from the orange and white European competition.

They say copying is the highest form of flattery and perhaps the Japanese manufacturers have been taking notes from the KTM/Husqvarna camp. Speculation aside though, we are always excited to see innovation in the sport and the world-famous Glen Helen Raceway would play host to our first laps on the most anticipated bike of the new year. 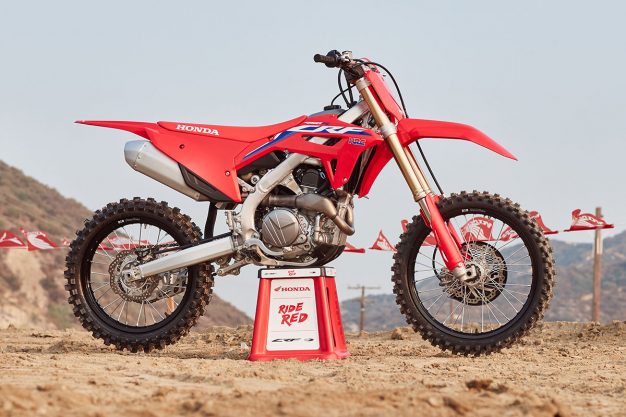 The brass at big red emphasized that their goal with the newest CRF450R was to make it ‘lighter, faster and razor-sharp’. To back these claims, the updated Honda rides on an all-new frame that features narrower main spars, a redesigned down-tube and rearranged reinforcement ribbing. The frame changes alone reduce overall weight by just over 1.5 pounds.

The single-sided exhaust system has also returned on Honda’s 450 for the first time since 2012 and losing the bulky second exhaust dropped an extra 2.7 pounds from the previous model. Updated intake and exhaust ports work with a new header design to improve bottom-end torque delivery.

A new Nissin hydraulic clutch also finds itself equipped on the CRF, previously only available to the HRC elite, plus an eighth plate and stiffer springs further accompany the hydraulic clutch internals. The cylinder-head has also been reworked, along with relocating the decompressor counterweight from the right side of the camshaft to the left for improved combustion stability.

An all-new exterior comes complete with redesigned bodywork and mounting points. Gone are the days of the white rear end, as these plastics ooze all-red from the front number plate to the rear fender. Honda has reshaped the airbox for more air flow, adding a new air-filter and removing the battery from that area in the process. Now, the air-filter on the Honda is easily accessible through the left-side number plate. 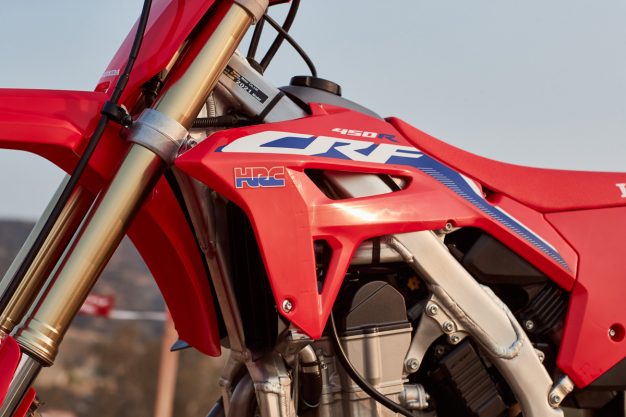 Where’d the battery go? Engineers have relocated it to mount behind the cylinder for a lower, more centralized mass. The easily-worn black coatings on the clutch and ignition covers have also been replaced by a more standard raw metal finish.

We were impressed to hear how much Honda thought of the rider-mechanic duo when constructing this motorcycle. The redesigned exterior is secured by a mere eight bolts, all with eight-millimeter heads. As mentioned above, the air-filter is more easily accessible and a new sight glass window on the engine cases eliminates any guessing when performing an oil change. It’s always a welcomed change to see ease of maintenance in mind on this level of race bike.

Riders are greeted to a slimmer new cockpit after jumping aboard the new CRF. On the skinnier side to begin with, the new frame and shroud – wrapping a titanium fuel tank – design make the 2021 CRF450R, without a doubt, the thinnest Honda we’ve felt between the knees. Thankfully, the bundle of handlebar buttons has been thinned out too. Mounted to the Renthal Fatbars is a consolidated control cluster featuring a blue ‘M’ for mode, a green ‘T’ for Honda Selectable Torque Control (HSTC/traction control) and a red engine-kill button.

This handlebar-mounted switch sits next to the clutch, while the newly-recessed starter button remains fastened to the throttle side. Familiar electronics carry over to the new model with standard, smooth and aggressive ignition modes being available to the rider. Once again, the three-mode HSTC finds itself equipped on the 2021 after being introduced on the 2020 model. 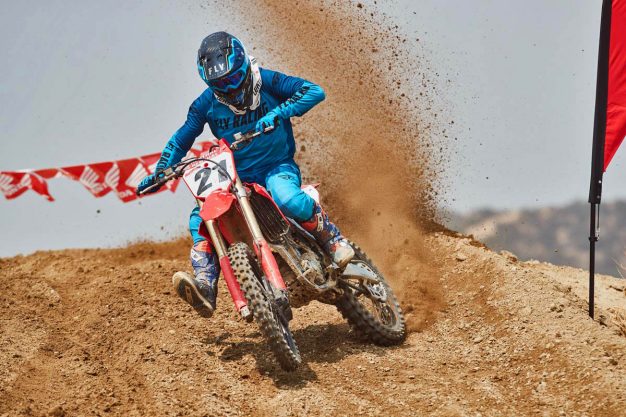 Three HRC Launch Control settings are also available, with RPM settings designed for advanced, intermediate, and novice riders. Similar to last year, riders simply need to hold the preferred button for three seconds while in neutral and the color-coded display will flash once, twice or three times to indicate which mode you’re in. The user-friendly redesign of the electronics package was greeted with applause as we found last year’s set-up difficult to navigate.

After dialing in our levers and selecting a map it was time to ride. The steep mountains of Glen Helen loomed in the distance and, keen to exploit any design flaws, we fired up the 2021 Honda CRF450R and rolled out for our first test and review on the latest model from the Japanese brand.

Tearing down the start straight, the only thing that came to mind was power. Smooth and usable power came in droves as I shifted from second to third gear, wringing the engine out as it revved towards the red-line. Top speed climbed higher, but the dire need to shift wasn’t there. The overall length of the powerband was apparent immediately and I was impressed with the bike’s ability to produce power high in the RPM range.

It was easy to leave the bike in second and third gear for the duration of the track, spreading the power out evenly without the motor signing off near the top. In 2020, I found the engine indisputably fast, but almost impossible to ride easily. There was good torque down low, but the meat of the power would come on quick with an all or nothing hit. This forced riders to stay on their toes, tiring them out during the length of a long moto. 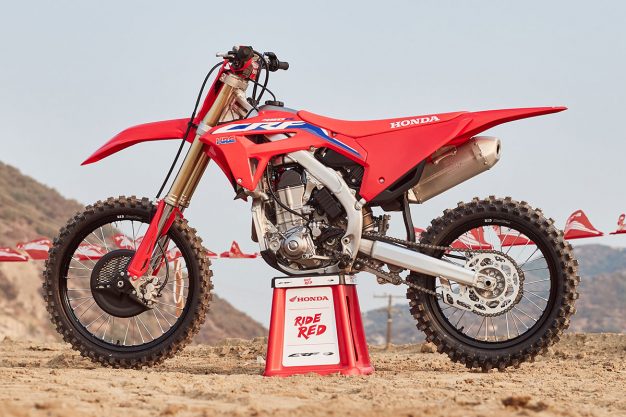 The new 2021 retains that same level of raw speed, now accompanied by a smoother and more linear power curve. Gear ratios feel more drawn-out and are paired with a rider friendly roll-on that’s easier to ride for a longer period of time. A more connected delivery from the throttle to the rear wheel also aid in the overall rideability of the red machine.

Honda is right on the money when they said ‘razor-sharp cornering’. Updates to the chassis and swingarm work in conjunction with the 49mm Showa coil-spring fork and Showa rear shock for a well-balanced cornering experience. Riders will definitely notice the bike’s overall weight reduction when turning and leaning the bike from one side to another.

Despite only being three pounds lighter in total, the reduction in overall mass provides a more nimble-feeling machine on the ground and in the air. Transitioning to a turn after landing off a jump or exiting straight-away feels extremely easy on this CRF. The bike does not hesitate or stutter as it did in years prior. Previously, the Honda had a tendency to rock back and forth and needed to be perfectly settled before entering a rut. Not this year.

Even with the suspension being a bit on the soft side, rarely did the bike overly dive or squat. Riders simply need to look, lean and execute. This ease upon the entry and exits of corners instilled confidence in every area of the race track. 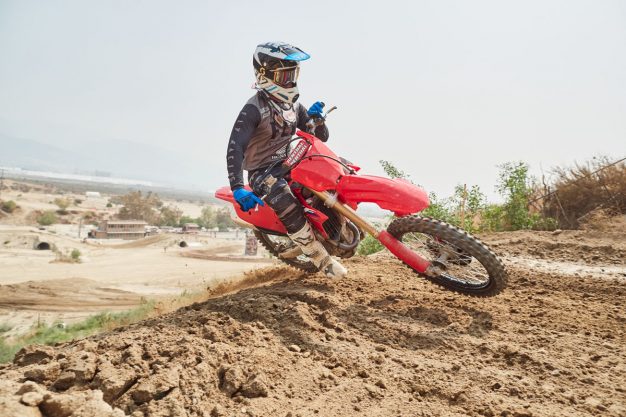 The testing grounds of Glen Helen do not lack a number of twists and turns, from the fast banks of Talladega to the sharp U-turns at the bottom of Mt Saint Helens. Nothing was safe from the wrath of the red riders as we dissected each of these corners from the cockpit of the new CRF.

During our time with this 2021 Honda CRF450R, we tinkered with the selection of electronic settings it had to offer. Starting the day in the standard map one, I did switch to maps two and three, only to return back to my reliable map one. Map two (smooth) was my preferred sweet spot on the 2020 model as I found confidence in the way it mellowed out the power’s knockout style hit, but map two just wasn’t enough this time.

That was because the 2021 machine offers a much more usable powerband from the get-go. Faster and more aggressive riders will certainly gear towards map three as it does offer some extra oomph, however, personally, the standard map one produced more than enough user-friendly power that allowed me to ride the fine line of fast and fun.

Finally, let’s talk traction control. The HSTC system is something I was a fan of on last year’s bike and I’m glad to see it back on-board for 2021. However you see it, the HSTC is designed to monitor RPM spikes and respond by temporarily reducing torque and retarding the ignition timing. The HSTC system did not seem totally necessary during my initial laps at Glen Helen, but I did turn it on once the track rougned up during the latter part of the day. I found it most useful when looking for traction in off-camber turns or in areas that were dry or overly wet/slick. The rider looking for any extra advantage will gladly find use in the HSTC system and map one was the sweet spot for us.

Riding the bike was easy, finding its faults was not. Other than the suspension being just a few clicks soft for a 175-pound test rider, the bike seems relatively ready to race right out of the box. After just a few hours of seat time, we went three clicks in on compression and one click out on rebound to get a good base setting.

Overall, the new 2021 Honda CRF450R hit the target for everything the old one missed. It pairs a new comfortable new chassis design with a fast yet, user-friendly engine package. This latest version is one of the only fully-redesigned bikes for the new year and is certain to be a podium contender. 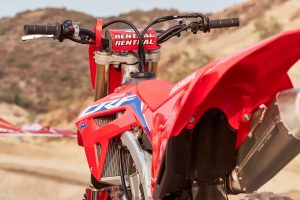 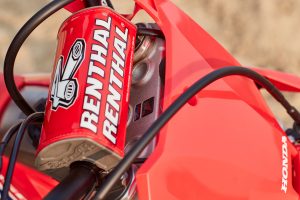 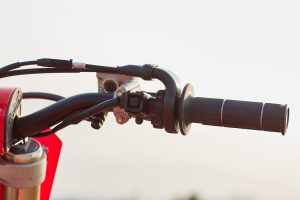 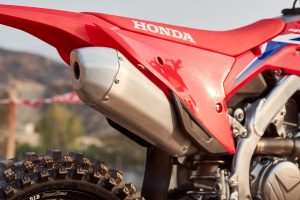 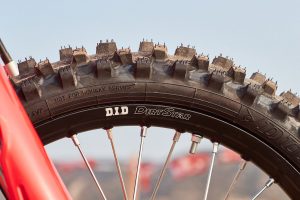 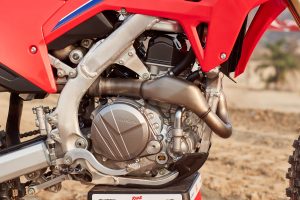 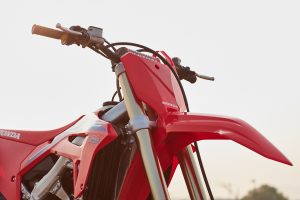 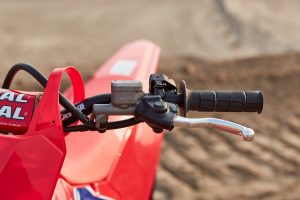 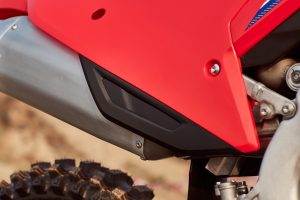 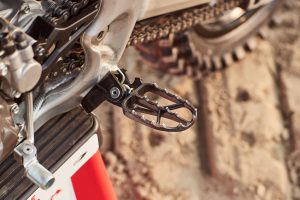 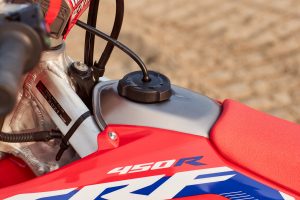 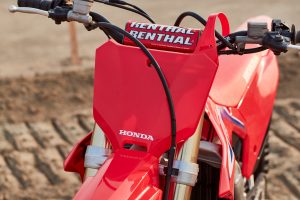 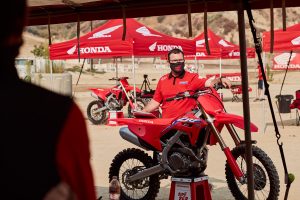 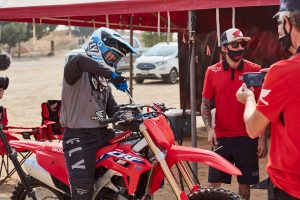