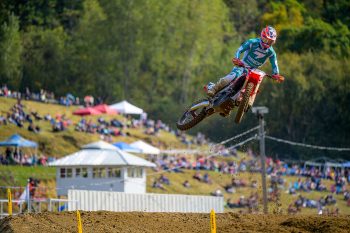 Geico Honda rookie Jo Shimoda says that being teammates with 250MX title-contender and former champion Jeremy Martin has helped fast-track his learning when it comes to bike settings in Lucas Oil Pro Motocross.

The 18-year-old Japanese talent finished eighth overall at Spring Creek last weekend after riding to 12-8 finishes and marking his second top 10 performance in succession. It’s been an impressive mid-season for Shimoda.

Martin is the most credentialed rider at Geico Honda, partnered with Shimoda, Jett Lawrence, Hunter Lawrence and Carson Mumford, lending his vast experience when it comes to bike set-up on the CRF250R.

“Especially this weekend at Millville, his home track, he told me a little bit about bike set-up and kind of helped me a little bit,” Shimoda said. “We were almost going to use the sand tire, which was the wrong idea because it looked sandy, but was hard-pack underneath. Not too much of riding technique or how to do starts or whatever, but mostly set-up and, pretty much, that’s it.”

With three rounds remaining in the season, Shimoda is currently positioned 13th in the 250 Class standings. A crash late in the motocross pre-season saw him enter Loretta Lynn’s behind the eight-ball and it’s only now that he’s beginning to find his true form.

“Before the season I crashed and I didn’t ride two weeks before the race,” he revealed. “I just did one 30-minute moto before and that was it, so my body wasn’t 100 percent to race and still building. I would be building anyway, but I would say that for 25 minutes I can do it – maybe if the temperature is cooler I can stay with those guys for 35 minutes.”