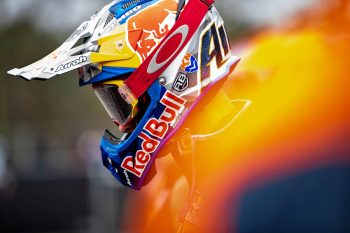 Four-time world champion Jeffrey Herlings has outlined the extensive list of injuries he sustained in the Faenza MXGP, left without feeling from his neck down for over 30 minutes after crashing in practice.

The Red Bull KTM rider has already missed the Emilia Romagna grand prix, but is yet to confirm when he will be able to return from these latest injuries during the 2020 season as he recovers from broken C1, C6 and T3 vertebrae.

“It’s been pretty quiet around me lately and I am sorry for not giving a update to my fans since my crash,” Herlings stated. “I cannot describe how devastating it was being there on the ground temporarily paralyzed and not having any feeling from my neck down for minimum half an hour. Eventually, I ended up breaking my C1, C6 and T3.

“Doctors told me I got through the eye of the needle with not ending up paralyzed. From the good side, I got three stable fractures with only small cracks in the bones and the healing process won’t be too long luckily – doctors say I will get a full recovery from this injury.”

Herlings had been leading the MXGP standings prior to his incident, however, the opportunity to challenge for a second premier class crown has evaporated with multiple triple-header rounds taking place during the mid-stages of the year. He said that he was in control of the series before the fall.

“I was feeling I was more than 100 percent in control this season, accepting a second-place and felt more in control of the championship then ever,” he continued. “I feel like that I messed up for the second season in a row, even if I have the feeling there was nothing I can blame myself for, for this crash.

“I am sorry to all my sponsors and partners and fans for once again not being able to deliver a championship to them. And most of all I would like to thank my entire KTM team and crew for their patience and their constant support towards me through thick and thin. It’s been a very though last two seasons, but I know I still got plenty to offer in this sport.

“For the moment the team and I have decided to sit out the next race in Mantova and look from there when exactly we will return to racing. I believe to become back healthy is the most important for now. Once again thanks to my team and partners for their great support – I will work hard to become back healthy again as soon as possible.”