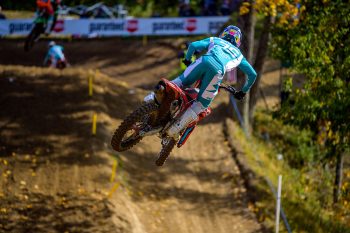 Delivering his best result of the season came as another confidence-boost for Hunter Lawrence in Millville, overcoming a recent shoulder injury to score fifth in the second 250MX moto.

Geico Honda’s Lawrence with seventh overall with a 7-5 results tally, saying that he felt as though ‘the real Hunter Lawrence’ is returning in the latter stages of the Lucas Oil Pro Motocross season.

“Back in the mix, a good step closer,” the elder Lawrence brother recalled. “I feel like I’m getting back to being the real Hunter Lawrence. Good starts, just rode a good race and was able to be relevant in the moto – it was good progress.

“We’ve done some testing with gearing that has helped with starts and the dirt wasn’t tilled super-deep, which helps us. Just a combination of a lot of things on the starts. The shoulder is good, no pain. It’s not at full strength capacity, but we’re getting a lot closer than we he been, just getting better and better.”

Lawrence is now 14th in the championship with three rounds remaining, beginning to build momentum ahead of the WW Motocross Park round in Jacksonville this Saturday. He’s had three top 10 moto finishes during the year, despite separating his shoulder in moto one at Loretta Lynn’s 2.