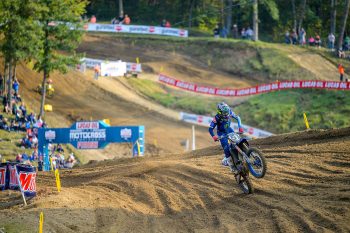 A third-place podium came as a shock of sorts for Justin Barcia after going 5-4 at Spring Creek, but the Monster Energy Yamaha rider admitted post-race that it was a difficult day out in Lucas Oil Pro Motocross.

Barcia found himself alongside Adam Cianciarulo and Blake Baggett on the overall podium even though he didn’t score any top-three finishes in the motos, signalling the inconsistencies of riders in round six of the 2020 season.

“It was definitely a struggle, I didn’t really feel very comfortable all day,” Barcia commented. “I was making tons and tons of changes, searching for the good stuff, but it never really came to me. I just pretty much rode as hard as I could all day and did everything I could.

“Honestly, I got quite lucky with what went on the second moto and I was just able to charge, charge, charge and put myself in good positions, but all in all, it was an extremely difficult day for me. Obviously, those guys, Blake and AC, rode extremely well and there was a lot of other guys riding extremely well. It was difficult, but stoked to be on the podium, for sure.”

For Barcia, who is now ranked fifth in the standings and 41 points outside of red plate-holder Zach Osborne, he again had to work his way up the order in both motos. The depth of 450MX isn’t making things any easier for him without a start up front.

“I don’t know… I don’t think so,” he said, when questioned if the field had more depth than in past seasons. “Obviously the field is stacked – I think it’s always stacked. I’m just making it look like that just because I start pretty much last place every race… It’s brutal, man, everyone’s on it.

“You go through a pack of guys and then you get a break and then there’s another pack, then the leaders are up front. It’s no joke, for sure. Everybody is riding really, really well, so it’s definitely not the funnest thing coming from the back. There was years where you could do it, but the field is definitely stacked and it’s obviously more than some years – it’s pretty gnarly battling with the guys.”

Currently in the final year of his Monster Energy Yamaha deal, Barcia continues to be linked to the newly-announced Troy Lee Designs Red Bull GasGas Factory Racing team ahead of 2021, understood to have agreed to terms with the KTM Group after it was initially thought Yamaha would be retaining him for next season within the Star Racing program.