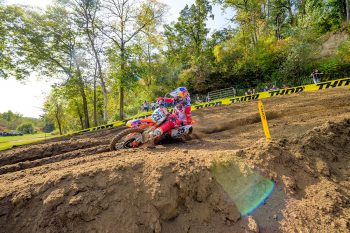 450MX title contender Marvin Musquin said he was lucky to avoid injury in the second moto crash that cost him a Spring Creek podium and important championship points.

After scoring third in moto one, Musquin was making progress in fourth position during the second outing when he went down in the closing stages.

The Red Bull KTM rider managed to remount and salvage 10th, which saw him claim sixth overall for the weekend, however, it would have been a certain third overall if he was able to cross the finish in P4.

“I was doing great in moto two until having a mishap at the very top of the mountain on the left-hander before you drop off,” Musquin said. “I lost the rear just a little bit and it got sideways even more while I was flying in the air, so when I landed I was still sideways and it hooked and I had a big crash.

“It was hard to get back up, but I was able to get some points with 10th. I’m super-disappointed because I was looking forward to getting a podium today, but I’m very lucky right now to not be injured.”

On a day where points-leader Zach Osborne (Rockstar Energy Husqvarna) encountered troubles of his own in moto two, Musquin is now third in the championship and 20 points outside of the lead with three rounds remaining.