Impact to stomach the cause of McAdoo non-finish

Fall in the second moto at Spring Creek forces Kawasaki rider out. 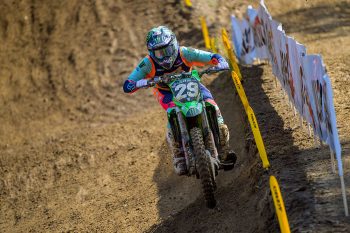 A handlebar to the stomach was the cause of Monster Energy Pro Circuit Kawasaki’s Cameron McAdoo exiting moto two at Millville, but he will be fit for Florida.

McAdoo ended moto one in sixth place, but crashed heavily in the early portion of moto two and soon pulled into the mechanic’s area to DNF.

“Millville was an up and down day for me,” McAdoo explained. “I had a pretty good start in the first moto and finished sixth. In the second moto, I felt really good for the first few laps.

“I was riding around fifth or sixth and was pushing towards the front, but I ended up crashing pretty hard and getting a handlebar to my stomach, which made me sick and forced me to pull in and unable to finish the moto.

“It definitely wasn’t the day we wanted but it was nice to get good starts. We’ll take that to Florida next week and give it our all.”