Battered Tickle hopeful of lining up again in Jacksonville 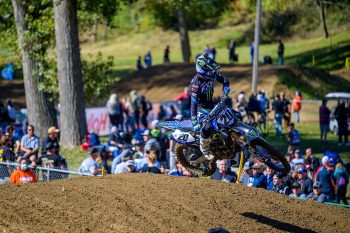 A battered Broc Tickle is hopeful that he will be able to line-up at WW Motocross Park after crashing out of moto two at Spring Creek on Saturday.

The Monster Energy Yamaha rider went down heavily in round six of Lucas Oil Pro Motocross, but has confirmed that he’s avoided any major injuries.

Tickle went into Spring Creek looking to build on his progress at RedBud, but unfortunately starts continued to be an issue. Undeterred, he steadily worked his way forward from 17th to 12th in the first moto.

In moto two, Tickle found himself back in 20th and attempted another charge through the pack. Four laps in, he’d worked his way up to 16th, but then crashed coming out of the triple step-up and was unable to finish the race.

“It was a tough day for me from the start,” Tickle recalled. “I struggled to get a flow on the track and it was difficult for me to feel comfortable. Millville is normally prepped differently – it was super-hard and slick.

“I knew it was going to be important to get good starts and stay away from people. I didn’t do that and I put myself in bad positions in both motos. I ended up 12th in the first moto and, in the second moto, I was coming through the pack and had a moment over a jump and had a big crash.

“I’m super-sore today and feeling banged up. I’m just going to take it day-by-day and see the progress heading into Jacksonville towards the end of the week to see where I’m at. I’m going to do what I need to do to try to get better and get back at the races.”

After going being credited with 37th position in moto two, he ended the day in P17 overall and now sits ninth in the championship standings following six of the nine rounds scheduled.