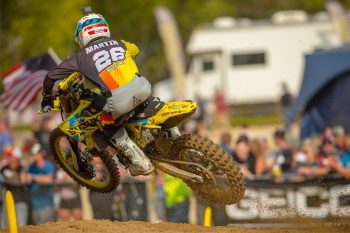 Alex Martin put his Suzuki RM-Z250 on the overall podium at his hometown track during round six of The Lucas Oil Pro Motocross series at Spring Creek MX in Millville, Minnesota at the weekend.

Joey Savatgy and Fredrik Noren each put in two strong moto performances; Savatgy used a top 10 overall on the day to move his Suzuki RM-Z450 into the top-10 in overall points and Noren ended the day with a top-10 moto finish and closed on the rider ahead of him in the points race.

Martin started the day right by qualifying fastest overall in the 250cc class. He combined that speed with Pirelli traction to turn a top-three start in each moto into two fourth place finishes. His speed and consistency earned him a top three overall finish on the National MX track that is situated on his parent’s property. A-Mart’s great day bumped him up one position in the overall point standings, putting him within eight points of a top-three spot with three rounds remaining in the season.

Said Martin: “It was pretty cool qualifying first in practice, I haven’t done that since like Unadilla 2016, so that was a good feeling for sure. It wasn’t an easy day for sure. I felt like I was scrapping for every second, every position, all day long… The JGR Yoshimura Suzuki got off to two great starts, top three both motos, and I just ‘kinda rode my own race and tried to survive. It was brutal out there. It was right down to the end both motos so I was happy to get a podium.”

Savatgy brought speed to Minnesota, netting two top-10 moto finishes. Though he was in position for an even stronger result, a collision with another rider late in the first moto dropped Savatgy several spots, “Versace” remounted quickly and kept his JGR-tuned machine inside the top 10.

Said Savatgy: “Another tough weekend. In the first moto I was riding decently and about 20 minutes in I lost the rear brake. We made a suspension change for the second moto and it wasn’t in the right direction. We will try again next weekend.”

Noren used strong starts to spend his day near the front; in both motos he was one of three RM-Z450s inside the top 10 through the first corner. He used steady rides on a track that featured an impossibly steep climb and descent each lap up and down Mt. Martin. Though “Fast Freddie” didn’t advance a position in the series points, the former Swedish MX2 Motocross Champion felt at home in the cooler weather and narrowed the points gap to the rider ahead of him in the standings.

Noren said: “I had two consistent motos and starts this weekend. It should be a good week of riding leading into WW Ranch. I’m looking forward to racing there.”

Team Manager Jeremy Albrecht said: “It was a solid day. Martin was the fastest in qualifying and rode two good motos for third overall. He gained some needed points on the weekend in the championship. Both Freddie and Joey had two solid motos but they wanted better. They keep improving each week and they hope next week they will get the position they want.”

The Lucas Oil Pro Motocross series runs its final three events of 2020 over the next three consecutive Saturdays. The JGR team – riders, mechanics, and support crew – are excited to bring thrilling racing to fans and are ready to keep charging and continue advancing their JGR Suzukis up the leaderboard.