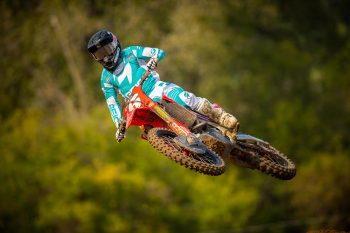 The GEICO Honda squad rolled to a solid day at round six of the Lucas Oil Pro Motocross Championship, held at Spring Creek MX Park in Millville, Minnesota. Jeremy Martin’s family owns the Spring Creek track, and Martin hoped to carry thoe hometown vibes to his fourth-straight overall win in the series. He was edged, however, by his championship rival Dylan Ferrandis. Martin put his GEICO Honda on the podium in second, following one of the most-action packed moto battles of the year.

The rest of the team was solid, too, with Jett Lawrence again just missing the overall podium with fourth, Hunter Lawrence in seventh, Jo Shimoda eighth and Carson Mumford 12th.

Martin went 5-2 in his two motos. That ended his win streak and handed the series lead back to Ferrandis. However he kept the limited number of fans on hand screaming during the second moto, as he stayed with Ferrandis and made several attempts at a last-lap pass for the win.

“It’s good, I guess,” said Martin. “I rode like garbage in that first moto. I didn’t get a very good start. I made a couple quick little passes but I was struggling and I just basically got fifth. Then moto two kind of made a couple little changes to the shock to allow me to push a little bit harder and got a better start. I was dogging Dylan the whole time and trying to get him, but he’s fast. I just couldn’t quite get up there and get close enough to try to make a move and got second overall on the day.”

Jett Lawrence continued his quest for an overall podium with 3-6 scores.

“First moto was really good, started around P6, made my way up to third, which put me in a good position to get an overall podium,” he said. “Just had to make sure I executed my second moto, which I did not do that very well. I ended up getting a terrible start, I think I came back from about 80th up to sixth which was really good. Just have to keep my head down. Next round is WW Ranch which is sand, and I really like sand so I can’t wait for that round.”

It was a breakthrough weekend for Jett’s brother Hunter, who is finally back to 100% after injuring his shoulder at round two. He went 7-5 for seventh.

“Back in the mix, a good step closer,” said Hunter. “I feel like I’m getting back to being the real Hunter Lawrence. Good starts, just rode a good race and was able to be relevant in the moto. It was good progress. We’ve done some testing with gearing that has helped with starts, and the dirt wasn’t tilled super deep, which helps us. Just a combination of a lot of things on the starts. The shoulder is good, no pain. It’s not at full strength capacity, but we’re getting a lot closer than we he been. Just getting better and better.”

Rookie Shimoda is also showing real progress, following a career-best moto finish of sixth at the previous round, he ties his career-best overall with eighth via 12-8 scores.

“Yeah in qualifying I was little tight and took me a couple laps to figure out the track. Second qualifying did pretty good for seventh,” he explained. “Moto 1 I got a really good jump out of the gate but hit Alex Marten and Jalek Swoll on the straight away which put me around 20th. I caught up to 12th. I really wanted to get a better start and see what I could do in the second moto, and I did get a better start, around 7-10. I made a couple of passes on the first lap and kept going for 7th.”

Mumford, a third rookie on the team, is also getting more solid by the week. He was disappointed to miss the top ten with 12th overall, although it was one of his stronger rides of the season. He went 13-10 for 12th.

“First moto, start, I had to be out of the top twenty, it was terrible, but somehow I came around 16th the first lap,” he said. “I pretty much stayed there the whole race, made some late-race passes and finished 13th. Second moto I started around 16th and guys either started fading, or I’d come across a bike being down. I ended up 10th.”

Three rounds remain in the championship, and Martin is down just three points on Ferrandis, as the GEICO Honda team looks to collect two championships in one season. Chase Sexton collected the 250SX East Region Championship in Monster Energy Supercross earlier in the year. The next motocross round takes place this weekend at WW Ranch in Jacksonville, Florida.