Direct updates from round six of the outdoor season in Millville. 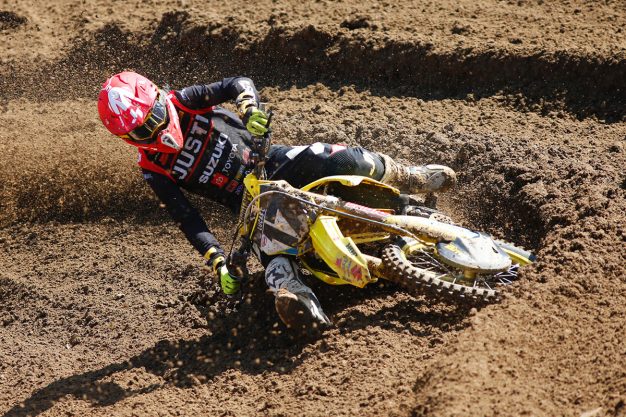 450MX moto one:
450MX moto one went down to the wire between Adam Cianciarulo (Monster Energy Kawasaki) and Blake Baggett (Rocky Mountain ATV/MC KTM WPS), but it was Cianciarulo who held on by just 1.758s across the line. Cianciarulo jumped out front early and maintained his composure despite pressure, firstly from Marvin Musquin (Red Bull KTM) and then from Baggett towards the end. A stall from Musquin while in P2 saw him drop to third, but comfortably ahead of points-leader Zach Osborne (Rockstar Energy Husqvarna) in fourth. Late mishaps from both Chase Sexton (Team Honda HRC) and Joey Savatgy (JGRMX Yoshimura Suzuki) allowed Justin Barcia (Monster Energy Yamaha) into fifth, followed by defending champion Eli Tomac (Monster Energy Kawasaki) – who started outside of the top 10 – and Christian Craig (Team Honda HRC), ahead of top qualifier Sexton and Savatgy. Finishing in 10th was Max Anstie (Twisted Tea Suzuki).

250MX moto two:
A showdown between Ferrandis and Jeremy Martin in the second encounter saw the Frenchman hold on by only 0.411s for the victory, taking the red plates back in the process with a 1-1 for the overall. McElrath led the early laps before going down, handing the lead to teammate Cooper, who held on for some time until Ferrandis and Martin made their way to the front. From there, Martin stalked Ferrandis and made a charge on the final lap, but came up short in one of the races of the year. Behind them in third was Cooper, followed by Alex Martin and the Lawrence brothers – Hunter ahead of Jett after he came from around P20 – in fifth and sixth. McElrath remounted to take seventh, joined in the top 10 by Jo Shimoda (Geico Honda), Mitchell Harrison (Monster Energy Pro Circuit Kawasaki) and Carson Mumford (Geico Honda), while Hampshire could only manage 11th this time out. McAdoo was a notable non-finisher, exiting in the early stages with sickness. Overall for the round, Ferrandis won ahead of Jeremy Martin and Alex Martin, handing Ferrandis a three-point advantage in the standings with three rounds remaining.

450MX moto two:
The race for the 450 Class crown tightened in a dramatic second moto at Millville, as Cianciarulo rode to his first-career double, while both Osborne and Musquin struck troubles. Osborne rode with a flat front tire for much of the moto to finish 16th and Musquin was left down in 10th after going down in the closing laps. Out front, there was no stopping Cianciarulo as he led from the outset and went on to win by 2.760s from Baggett, with Sexton third. Next were Barcia and Tomac, with Craig, Savatgy, Anstie, Fredrik Noren (JGRMX Yoshimura Suzuki) and Musquin the top 10. A major crash saw Broc Tickle (Monster Energy Yamaha) ruled out, but appeared to be uninjured in the incident. Overall, Cianciarulo made it two in a row over Baggett and the consistent Barcia, while in the points, Osborne – 10th overall today – has a 15-point buffer over Cianciarulo and Musquin in a further five points in arrears.