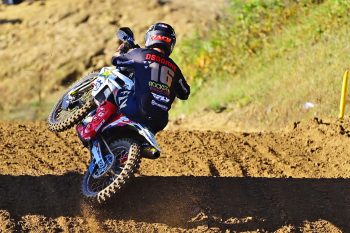 450MX red plate-holder Zach Osborne has conceded that it won’t be a case of managing a sizeable advantage through the closing rounds of Lucas Oil Pro Motocross after a flat front tire cost him vital points at Spring Creek.

Osborne has been in control of the series through much of the 2020 season, but saw his advantage slashed from 28 to 15 points after going 4-16 for 10th overall.

It was an intense second moto for the Rockstar Energy Husqvarna rider, pressing on to salvage five points and choosing not to pit for repairs. He said afterwards that he wasn’t aware his crew was calling him in with a front wheel ready to swap out.

“I honestly didn’t see them,” Osborne said post-race. “They kind of changed the position where they were and I thought they had gone back to get a wheel or something. I didn’t see anyone, so I just kept hammering and trying to manage it as good as I could.

“It was quite tough, obviously, in some places – I almost went down quite a few times. You know what, this Rockstar Energy Husqvarna Factory Racing Team’s been down before… we’re still not down, we’re still leading the championship and in a good position.

“Things just got a little bit tighter you know, so it’s a little clearer what we need to do now. There’s no managing it, it’s just kinda trying to build a gap again. I’ve gotta give it up to the good lord for keeping me safe, it wasn’t our day today, but we’ll be back.”

On a day where Osborne and fellow title challenger Marvin Musquin (Red Bull KTM) encountered troubles, last year’s 250MX champion Adam Cianciarulo (Monster Energy Kawasaki) made it two wins in a row to climb into second and reduce his deficit to Osborne from 42 to 15 points with three rounds remaining.