Return to professional competition being considered ahead of 2021. 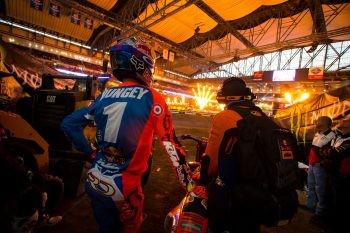 Retired multiple-time Supercross and Pro Motocross champion Ryan Dungey has confirmed that he is seeking opportunities to make a comeback in 2021.

During the qualifying broadcast at Spring Creek today, Dungey addressed rumours that he was looking to return next season and said that it is a possibility.

The 31-year-old has been seen riding Honda machinery in recent months despite his split with the Geico Honda team, however, he is keeping his options open in a bid to make a shock return to competition.

“Strictly being transparent, I have been looking at some options here, knocking on some doors and seeing what’s available – I’m kind of getting that fire back,” Dungey revealed. “Obviously 2020 has been really interesting, budgets have changed and things are different.

“It’s not like there has been a lot of openings in our sport as it is… There are 450 guys fighting for spots as it is. If the right opportunity comes along and things look good, then we’ll seek it out. As of right now, things are calm and there are really not a lot of opportunities out there, so that is where we’re at.”