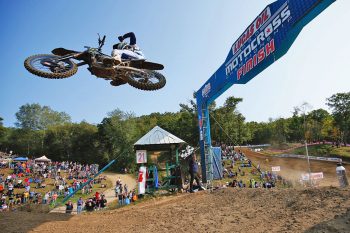 Monster Energy Star Yamaha Racing’s Dylan Ferrandis won both motos to take back the Lucas Oil Pro Motocross 250MX Championship points lead at the Spring Creek National in Millville, Minnesota. After a ninth-place finish in the first moto, teammate Justin Cooper bounced back to cross the line third in Moto 2 for fifth overall. Shane McElrath was 11th (15-7), and rookie Jarrett Frye completed his first outing in 15th with a pair of 14th-place finishes.

Ferrandis got off to a decent start in the first moto in fourth. By lap two, he was in third and chasing down his teammate Cooper, making his way through a lap later. The Frenchman then had his sights set on the leader and jumped to the lead in the triple step-up section of the track after the halfway mark. Ferrandis threw down some fast laps to expand his gap on the competition to over four seconds at the checkered flag.

In the second moto, Ferrandis got another good start and moved into third behind teammates McElrath and Cooper. Unfortunately for McElrath, a tip over in the downhill-right turn had him rejoining in fifth. With Ferrandis’ title rival Jeremy Martin in pursuit, he was trying everything to pass his teammate. Cooper was able to hold him off for three laps, but the back-to-back 250SX West Champion made the pass for the lead before the finish-line jump with Martin coming through shortly after. Ferrandis tried to check out, but the challenging conditions made it difficult to break away. On the final lap, the Frenchman held off his rival for his second win of the day and the overall victory to take back the red plate with a three-point advantage in the title fight.

Cooper qualified second and then backed that up with a pair second-place starts in his motos. In the first moto, the New Yorker held onto third for six laps but unfortunately started to have arm pump issues. He did what he could to maintain his position but ultimately finished ninth at the end of the 30-minute-plus-two-lap moto. Despite that first tough moto, Cooper came back stronger. He ran consistent laps to finish third in Moto 2 for fifth overall.

McElrath found himself back in 24th as he completed the first lap in Moto 1. The North Carolinian steadily worked his way through the pack to salvage some points but ultimately ran out of time and had to settle for a 15th-place finish. He rebounded in Moto 2 with the holeshot and was running a solid race up front before his tip over on the second lap. McElrath quickly rejoined and was holding down fifth, but ultimately crossed the line seventh.

Monster Energy Star Yamaha Racing’s Frye had a solid start to his professional career in Millville, Minnesota. The 19-year-old qualified seventh and was inside the top 10 after the gate dropped in Moto 1. As the race wore on, Frye was shuffled back to 14th. In the second moto, he was 20th after the start but pushed his way forward for another 14th-place finish for 15th overall.

Wil Hahn – Monster Energy Star Yamaha Racing Team Manager
“It was a great day for us with Dylan going 1-1 again after a tough RedBud. We’re in this fight until the end and look to keep the momentum going. Justin continued to make progress with two good starts and a third-place finish in Moto 2. After a bad start in Moto 1, Shane rebounded to take a holeshot, and Jarrett put in a solid result for his first Pro Motocross round. We’ll get back to work for Florida next weekend.”

Dylan Ferrandis – Monster Energy Star Yamaha Racing
“Finally it was a good day for me here in Millville. The last three years were a nightmare, which was a bummer since it’s my favorite track on the schedule. I had a big fight with my main rival in the championship, but the red plate is back on my Yamaha bike and it feels awesome.”

Justin Cooper – Monster Energy Star Yamaha Racing
“I struggled in Moto 1 with some arm pump and was just really not riding like myself. In the second moto, we made a few changes, and I was able to fight with those guys up front for a while. Overall, it was another average weekend. I have got to put two motos together. On a positive note, I’m glad to be back on the podium in Moto 2.”

Shane McElrath – Monster Energy Star Yamaha Racing
“It was a subpar day for me today. I was just off all day and struggled every time I was on the track. We’re going to regroup and work on coming back stronger next weekend in Jacksonville.”

Jarrett Frye – Monster Energy Star Yamaha Racing
“It was an okay day for me. It started well, qualifying seventh, and I was happy with that going into the motos. Two 14ths was not the moto scores I was looking for, but I’m going to take what I learned today and try to build off of it and be better next weekend.”