A perfect score at Spring Creek has seen Dylan Ferrandis return to the top of the 250MX standings in round six of Lucas Oil Pro Motocross following a spectacular showdown with title rival Jeremy Martin.

Hampshire led the first half of the moto before Ferrandis struck and that’s how they would remain. Behind them, Jett Lawrence (Geico Honda) worked his way by top qualifier Alex Martin (JGRMX Yoshimura Suzuki) for the final moto podium during the latter stages, while red plate-holder Jeremy Martin (Geico Honda) completed the top five.

A showdown between Ferrandis and Jeremy Martin in the second encounter saw the Frenchman hold on by only 0.411s for the victory, taking the red plates back in the process with a 1-1 for the overall.

McElrath led the early laps before going down, handing the lead to teammate Cooper, who held on for some time until Ferrandis and Martin made their way to the front. From there, Martin stalked Ferrandis and made a charge on the final lap, but came up short in one of the races of the year.

Behind them in third was Cooper, followed by Alex Martin and the Lawrence brothers – Hunter ahead of Jett after he came from around P20 – in fifth and sixth. McElrath remounted to take seventh, joined in the top 10 by Jo Shimoda (Geico Honda), Mitchell Harrison (Monster Energy Pro Circuit Kawasaki) and Carson Mumford (Geico Honda).

Hampshire could only manage 11th this time out, while McAdoo was a notable non-finisher, exiting in the early stages with sickness. Overall for the round, Ferrandis won ahead of Jeremy Martin and Alex Martin, handing Ferrandis a three-point advantage in the standings with three rounds remaining.

The 2020 Lucas Oil Pro Motocross Championship will continue with round seven at WW Motocross Park in Jacksonville, Florida, next Saturday, 26 September. 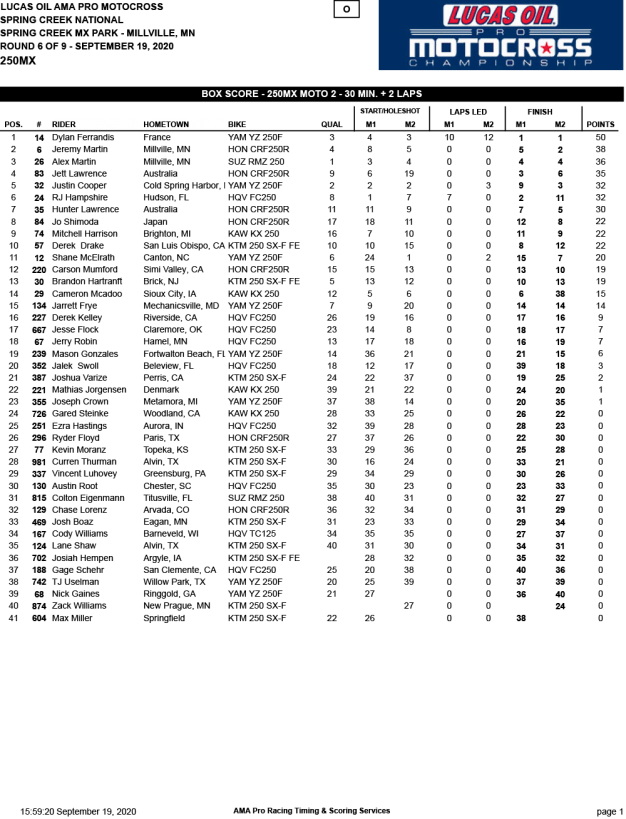