Barcia returns to the podium at Spring Creek 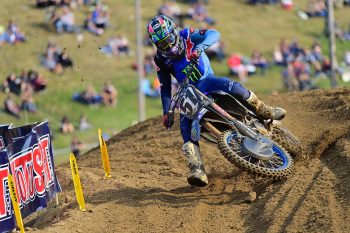 Monster Energy Yamaha Factory Racing Team’s Justin Barcia put on a good showing with a 5-4 result to end the day third at the Spring Creek National and score his second podium finish of the 2020 Lucas Oil Pro Motocross season. His teammate Broc Tickle fought his way back to 12th in the first moto but unfortunately was unable to finish the second moto after a crash in the new section of the track, ending the day 17th overall.

In the first moto, Barcia got off to a decent start in eighth and moved into seventh by the fifth lap. The race heated up with pressure coming from behind, but the Florida rider kept his cool and closed the gap on the rider ahead. With two laps to go, Barcia took the outside line going out of the whoops to advance to sixth. He then inherited another spot after a rider error to score his sixth top-five finish of the season. After the gate dropped in the second moto, Barcia made his way to sixth. He put his head down and kept it on two wheels in the challenging conditions to cross the line fourth for third overall.

Tickle went into Spring Creek looking to build on his progress at RedBud, but unfortunately starts continued to be an issue. Undeterred, he steadily worked his way forward from 17th to 12th in the first moto. In Moto 2, Tickle found himself back in 20th and attempted another charge through the pack. Four laps in, he worked his way up to 16th but then crashed coming out of the triple step-up and was unable to finish the race. Tickle was credited with 37th to end the day 17th.

Jim Roach – Yamaha Racing Department Manager for YMUS
“It was a difficult day today at Spring Creek, the track conditions were very different than normal. In Moto 1, both guys didn’t get the start they were hoping for but managed to work their way through the field, with Justin finishing fifth and Broc 12th. In Moto 2, Broc had a big crash on the uphill triple, but fortunately, is only battered and bruised. Justin was able to work himself up to fourth for third overall. It was a good result on a tough day. We’ll go back, regroup and come back fighting for the top next weekend in Florida.”

Justin Barcia – Monster Energy Yamaha Factory Racing Team
“Today was one of those warrior days. There were a lot of challenges. The track was extremely tough. I didn’t feel comfortable all day and just kind of struggled a little bit with the setup, but I put in two solid motos and never gave up. I tried my hardest and came out with a podium, so that was really cool. It was definitely one of those days where you have to be really tough mentally and ride as hard as you can and try to keep it on two wheels. I would have liked for it to be easier and would have liked to win, but getting a podium on these hard days is a great result. All in all, it was a positive day and I’m looking forward to next weekend already.”

Broc Tickle – Monster Energy Yamaha Factory Racing Team
“It was a tough day for me from the start. I struggled to get a flow on the track and it was difficult for me to feel comfortable. Millville is normally prepped differently. It was super hard and slick. We had a decent practice, I was 11th overall for qualifying. I knew it was going to be important to get good starts and stay away from people. I didn’t do that. I put myself in bad positions in both motos. I ended up 12th in the first moto and in the second moto, I was coming through the pack and had a moment over a jump and had a big crash. I’m super sore today and feeling banged up. I’m just going to take it day by day and see the progress heading into Jacksonville towards the end of the week to see where I’m at. I’m going to do what I need to do to try to get better and get back at the races.”