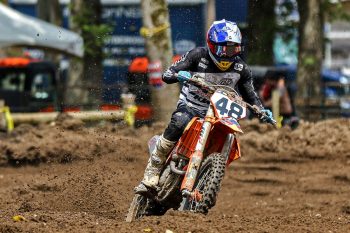 Troy Lee Designs Red Bull KTM has drafted in Nate Thrasher ahead of Saturday’s sixth round of Lucas Oil Pro Motocross at Spring Creek in Millville.

Thrasher will make his professional debut with the factory team in 250MX after recently claiming runner-up in both 250 B and Schoolboy 2 (12-17) B/C at Loretta Lynn’s.

Recognized as one of the most capable young prospects at the 2020 Monster Energy AMA Amateur National Motocross Championship, he won three motos at Loretta’s, but fell short of both titles overall.

It was expected that Thrasher’s first pro appearance wouldn’t be until Hangtown next season, however, the TLD team has moved that schedule forward to this weekend. It’s uncertain if he will continue for additional rounds.

Thrasher will join team regulars Brandon Hartranft and Derek Drake at TLD Red Bull KTM for Spring Creek, with Pierce Brown currently sidelined after injuring his knee in the second moto at RedBud 1.