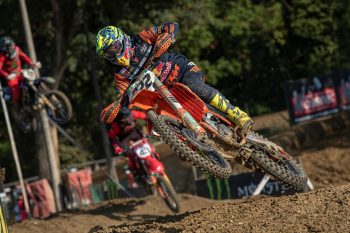 Nine-time world champion Antonio Cairoli is back atop the MXGP standings after a consistent 2-2 score earned him the overall at the Grand Prix of Emilia Romagna.

The third round in a row at Faenza, Red Bull KTM’s Cairoli stood on top of the podium alongside Tim Gajser (Team HRC) and Jorge Prado (Red Bull KTM).

It was rookie standout Prado who won the opening moto from Cairoli and Jeremy Seewer (Monster Energy Yamaha), before defending champion Gajser topped moto two over Cairoli and Romain Febvre (Monster Energy Kawasaki). Gajser’s 5-1 score placed him second for the round, ahead of Prado’s 1-6 results.

Australian Mitch Evans (Team HRC) also continued to show signs of improvement over the weekend, qualifying fourth and then finishing fourth in the first moto, followed by eighth in moto two for sixth overall.

With former red plate-holder Jeffrey Herlings (Red Bull KTM) sidelined, Cairoli is the new points-leader, now seven points ahead of Gajser as the fight for the 2020 championship intensifies mid-season. 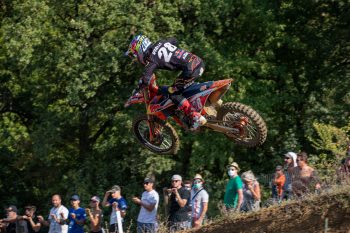 MX2 championship leader Tom Vialle made it another sweep for Red Bull KTM in Italy after being tied on points with title rival Jago Geerts (Monster Energy Yamaha).

A 4-3 for Beaton saw him stand on the podium alongside Vialle and Geerts in third overall, with Vialle still leading the standings by 21 points over Geerts.

Of the remaining Australians in the field, Team Honda 114 Motorsports riders Nathan Crawford and Bailey Malkiewicz were ranked 11th and 17th overall.

The 2020 MXGP World Championship will now take one weekend off before resuming at Mantova, Italy, on 27 September for the first of three-straight events in another triple-header schedule. 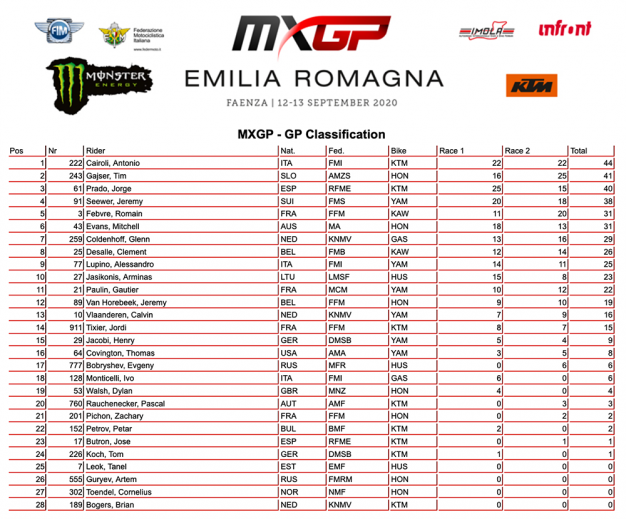 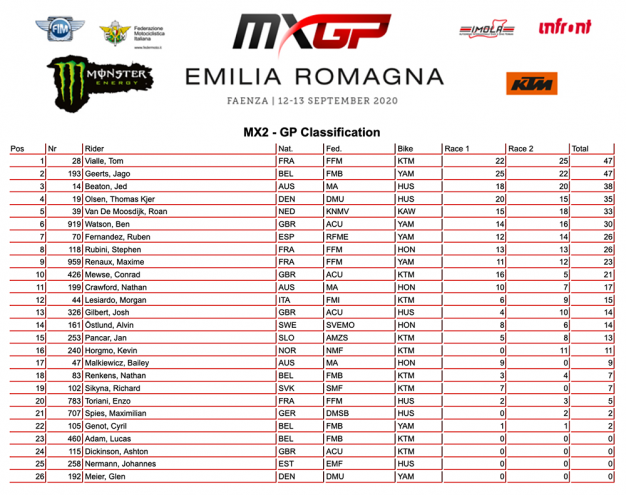