Prado breaks through in Faenza MXGP as Herlings sidelined

It was a Red Bull KTM double at the MXGP of Faenza as Jorge Prado and Tom Vialle took victory, on a day that saw premier class series leader Jeffrey Herlings injured.

Herlings crashed during practice, taken to a nearby hospital for a precautionary MRI on his head and neck and to also examine some pain to his shoulder. He was conscious and had full feeling across his body.

It was Jeremy Seewer (Monster Energy Yamaha) who earned his first-career MXGP race win in the opening moto, before defending champion Tim Gajser (Team HRC) won the second encounter. It was a 2-2 score for rookie Prado that saw him top the grand prix overall, joined on the podium by Gajser (5-1) and Seewer (1-7). 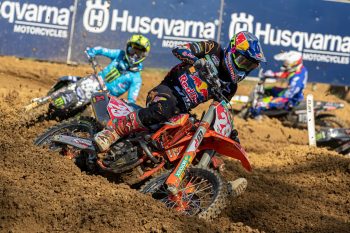 The world championship is still led by Herlings, now 22 points ahead of Antonio Cairoli (Red Bull KTM) – fourth overall at Faenza – and a further four ahead of Gajser.

In MX2, current red plate-holder Vialle stretched his points-lead to 21 points after going 1-1 on Wednesday.

The 2020 MXGP World Championship will continue with its third-straight round at the Italian Faenza circuit this Sunday, 13 September. 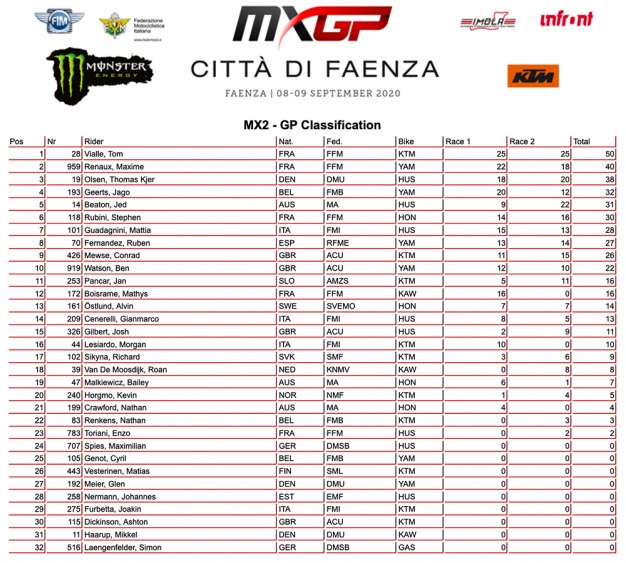