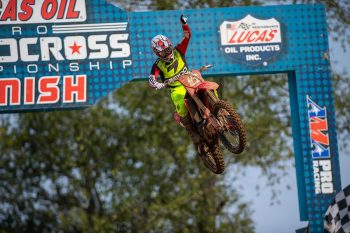 The first-ever double header in near 50-years of Lucas Oil AMA Pro Motocross bared fruit for GEICO Honda’s Jeremy Martin. The Minnesota man dominated Friday’s first leg of the RedBud National with 1-1 finishes, collecting his third-straight overall victory in the championship, enough to take over the 250MX series points lead.

Martin’s fortunes turned in the second RedBud race on Monday, when he was hit from behind by championship rival Dylan Ferrandis, leaving both riders on the ground. Martin picked himself up in 11th place and struggled the rest of the way with a new rear suspension setting. He changed his rear shock for moto two, then found his customary place at the front and won the race, giving him three of the four moto wins over the long weekend.

“It was a crazy day, I was a good clip off the pace in practice, and Dylan [Ferrandis] put in a lightning-fast lap time. I was like, “Okay, we’re going to go to work today!” said Martin of Friday’s race. “Moto one I got a good start and kept moving forward and won the moto. I saw Dylan fall right next to me in that one. We made some bike changes for moto two and I felt much better. I got up behind Shane [McElrath] and he was jumping LaRocco’s Leap and I was like “I don’t think I’ve got this!” I’d do all this work and catch him, he’d pull away there, then I’d catch back up again. I was finally able to make the pass, got the lead, and then went into control mode.

“Second RedBud, we tried a new shock in practice and we ended up running it in the first moto,” explained Martin. “I knew right away it was a mistake. I had arm pump. I almost passed Jett, and I knew Dylan was on me. Unfortunately, we came together going down to the inside. I knew there was one more option on the inside, but I knew the lines came together and I had the tightest line that could be in that turn. We came together, I went down, and it was damage control from there. Ended up 11th. Moto two, put on the old shock, got into the lead and won the moto.”

Martin carries a nine-point lead in the championship over Ferrandis with four races remaining.

Jett Lawrence continued his string of consistent riding at RedBud, flirting with podium finishes each time. He went 4-8 for sixth overall on Friday, and 3-8 for sixth on Monday. He credited a gearing change for better starts on Friday. He was toward the front again on Monday and nearly won the first moto, taking a close third, but he got caught in Ty Masterpool’s crash in moto two, which ruined his chance for an overall podium.

“Qualifying for Monday was definitely better than the first RedBud, I was 24th in the first one, not sure I could do any worse than that,” said Lawrence. “Friday, I was fiddling with the suspension and never could get a good lap in. But I felt solid in the motos and I’m happy that I keep improving. On Monday I got like the ninth gate pick, and going into the race, I didn’t get the greatest start, on the jump I was quite slow, but I was able to really drive it into the first corner and really tuck around the inside of the first turn. Came out fourth or fifth. Masterpool ended up going down, so that was one less person I had to pass. It was a freaking good moto, we were all really close. I tried to make a run at both of them but just a few mistakes ended up letting me down. I almost got RJ on the last lap, last turn, he had been going outside, but I was going to go inside, which was really lucky for him because I was going to go up there and get him. I was definitely trying to go for the win, but I was happy to get a podium finish. Second moto I didn’t get a good start, but I was coming through to like sixth or fifth when I had Masterpool crash in front of me. Just a bit of bad luck, he washed the front and I had nowhere to go. I straight-up stoppied into his bike, I couldn’t slow down fast enough! That ended up wrecking my podium chances. I’m just happy I was able to get that one moto podium finish and hopefully we can keep getting more of those.”

On Friday, Hunter Lawrence began showing signs of his old speed and skills with a tenth in a moto, and 17-10 scores for 12th overall.

“There was a sign, but the sign said, “I still can’t get starts,” joked Lawrence. “But no, the riding is getting a lot better, a lot of positives. My shoulder felt good, I was strong the whole moto, I’m happy about that because after Loretta’s, it looked like my season was going to be over, and I’d be looking for a job a Wal-Mart.”

Monday was an unlucky day for Hunter.

“You ever felt like you’re getting punched in the back of the head and also getting a fist in the face at the same time? Neither have I but I can imagine yesterday felt about the same for me,” said Hunter of his Monday. “First moto, pretty good start, but I got hustle and bustled in the first turn, was back to like 19th, but I got up to 12th. It’s weird because it felt like I was top five speed, everyone is so close.

“Second moto I finally got around the first turn pretty decent and then [Hartranft] crashed over a jump on the inside of a corner, I was right behind him and I landed on his bike,” continued Hunter. “I pretty much destroyed the gear shifter spline. They tried to put a new shifter on but the spline was bent so the thing was bent even with a new lever. I was nearly a lap down, but I just started riding. I heard people cheering for me! Maybe they thought I was leading! I was putting in some pretty good laps. When Masterpool was in first I think I actually pulled out on him a little bit, and I was getting blue flags, so I didn’t know what I should do. Then my mechanic said JMart was coming so I sort of cruised for a lap, then I just stayed behind fourth-placed Harrison finished there. It’s funny, both motos I finished right around JMart so that’s something, but I wasn’t doing it on the lead lap the second moto. Shoulder is feeling good, too, which is something I’m happy with.”

Hunter Lawrence’s scores were 12-26 for 18th overall on Monday.

Rookie racers Jo Shimoda and Carson Mumford had their troubles on the weekend but each logged their best moto in their final race of the double header.

“Definitely wasn’t stoked on how RedBud went, but I am glad to see a little bit of what RedBud is like, just without the fans,” said the Californian of his first visit to the track. “Honestly, both days were equally as bad, maybe the first day was a little worse, my qualifying was off, and I went 15-17. I crashed one moto and the best I could get was 17th. Second day, I think I was riding the bike a little bit better. First moto, I got a bad start and caught up to 16th. It’s crazy because I was riding pretty fast but I could only come to 16th. Second moto I got an eight-place start and passed up to fifth pretty quick. I was behind [Mitchel] Harrison and was trying to pass into fourth but I tucked the front in the sand. I was hidden behind a roller so I was a little nervous about getting my bike really quick. I was in 19th or so. I passed a good group of guys right away, and I got 12th. That moto was good, I rode the bike good, even getting up from a crash I still wasn’t very tired. Also, when I was up in fifth, it was just as easy to run that pace. The pace is the exact same as 16th, and you’re eating less roost so you can go even faster. I was looking forward to spending the whole race up there, but then I crashed. So that’s a little bit to look forward to for Millville.”

“On Friday, moto one I had horrible start and couldn’t find my pace and don’t even know where I finished,” said Shimoda. “Moto two, bad start again and finished 12th. Really I just struggled all day. In the second race, moto one I had a bad start and a crash but I was feeling good on the bike finished 15th. It was better. Then finally I got a good start in moto two and I made a pass for fifth. I got passed on LaRocco’s Leap, which I couldn’t jump, and finished sixth. It was a much better ending to the weekend.”