Tickle, Barcia finish inside the top 10 at RedBud 2 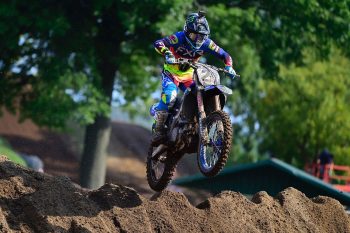 Monster Energy Yamaha Factory Racing Team’s Broc Tickle had a solid ride at the RedBud National II finishing eighth and fifth for a sixth overall result in Buchanan, Michigan. His teammate Barcia was able to salvage some points on a tough day with eighth overall (5-10) as the Lucas Oil Pro Motocross Championship hits the halfway mark of the season.

Tickle and the team made some changes to the setup after the first RedBud and he felt more comfortable straight away at Monday’s National. When the gate dropped in Moto 1, he found himself back in 20th at the start but was able to make passes on a difficult track to finish eighth. He made it easier on himself in the second moto, with a much better start inside the top 10, and crossed the finish line fifth to end the day sixth overall.

It went the other way for his teammate Barcia who had a better first moto. The Florida rider was fifth after the first lap and made the pass for fourth. As the race wore on, the battle heated up and no one was able to really separate themselves from each other in the lead group. Barcia was holding his ground in fourth until he made a mistake with three laps to go and ultimately finished fifth. The second moto got off to a tough start with Barcia getting caught up in a multi-rider crash in Turn 2. He was all the way back in 25th on the first lap but kept pushing forward to reach the top 10 near the end of the race for eighth overall.

The Monster Energy Yamaha Factory Racing Team gets a weekend off before heading to Millville, Minnesota, for Round 6 of Lucas Oil Pro Motocross Championship at the Spring Creek National, on Saturday, September 19.

Jim Roach – Yamaha Racing Department Manager for YMUS
“Today was a tough day at Red Bud. We were hoping to improve on our results from last Friday. Justin got off to a good start in the first moto and was running in the top four for the majority of the race, but ultimately finished fifth. Broc had a tough start and had to come through the field to eighth. For moto two Justin and Broc both had a good start. Unfortunately, Justin got caught up in a crash with a couple of other riders in turn two, forcing him to try and work his way through the field. Broc capitalized on his good start and finished fifth for the second moto. We’ll take what we’ve learned here today and keep working over the next week and a half to come back at Millville and return to the podium.”

Broc Tickle – Monster Energy Yamaha Factory Racing Team
“I felt better from the get-go. We made a change based on comments from Red Bud I. I wasn’t spectacular in practice time-wise compared to everybody, but I felt good on the bike. I knew it was going to be important to be consistent and obviously get good starts and put myself into a position to click off laps the way I wanted to. The first moto didn’t go as planned. I was probably around 20th the first lap and worked my way up to eighth, which I thought was really good for the track conditions. I hear a lot of guys today saying that it was hard to pass, but I was able to make my way through the pack pretty well. In the second moto I finally put myself in a decent position and a couple of guys made mistakes. I was able to make a few more passes and ended up fifth in the second moto. We’re 8th in points. We’re in the mix. I haven’t raced in three years, so this is a big step in the right direction. I want to be competitive next year and still want race. The goal is to focus on each weekend and get as good as we can before the season ends.”

Justin Barcia – Monster Energy Yamaha Factory Racing Team
“It was a challenging day. The first moto was a bit difficult. I rode a little tight and ended up fifth. Then in the second moto, I ended up getting into a little bit of a tangle on the second corner which was unfortunate. It didn’t go the way I wanted it to. I was definitely searching a little bit on the bike for some changes after the first RedBud we raced on Friday. I made some changes to the bike that I shouldn’t have and went a little bit in the wrong direction. That’s just a mistake that I made. I have some time to regroup now before the next round. We’re going to go back to California to do some work and probably take the weekend off to relax a bit before coming back and going after it.”