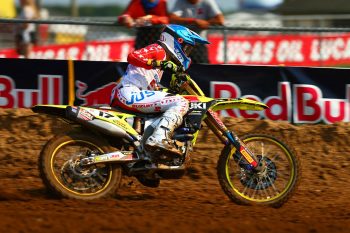 In a first for the Lucas Oil Pro Motocross series, two events were held just three days apart and the JGRMX/ Yoshimura/ Suzuki Racing riders took away four top-10 overall finishes at the Red Bud MX double-header in America at the weekend.

In the 250cc class Alex Martin and his Suzuki RM-Z250 placed inside the top 10 in every moto and pulled down a top-five overall finish. In 450cc racing, Joey Savatgy put his Suzuki RM-Z450 in the top 10 overall in both Friday and Monday’s racing and just like teammate Fredrik Noren, posted strong starts and good speed to advance in the overall points standings.

After putting together the fifth quickest in timed qualifying, Martin started moto one in around 10th place and from there threaded his way through a tight lead pack that kept within a few seconds of a podium position. In the second moto, ‘A-Mart’ got his JGR-tuned Suzuki up into the top three on the opening laps and kept the leader within a few seconds for the bulk of the race. He unfortunately lost one spot late in the race and finished fourth in spite of being one of the few riders to launch the track’s famous 120-foot triple jump, ‘LaRocco’s Leap.’

Said Martin: “We had a decent day. My starts and speed were plenty good for a podium but I just didn’t ride well in the first moto. In the second moto I waited too long to jump the leap. I really love this track.”

Savatgy made the best of a mediocre start and by the end of moto one he’d put his JGR-tuned Suzuki inside the top 10. A poor start in moto two stacked the odds against him, but ‘Versace’ put his RM-Z450’s power into the Michigan soil and finished the day with a top 10 overall finish.

Savatgy said: “Today for me was a big struggle. I didn’t get great starts and I just had a hard time getting comfortable out there.”

Noren jumped out with a top-three start in the first moto, right on the rear wheel of Suzuki-mounted Max Anstie, but an issue on lap six ended Noren’s moto early. ‘Fast Freddie’ was ready when moto two dropped the gate and used consistent fast laps to hold a top-10 position for the entire moto.

“It’s so much fun being back racing at Red Bud.” Noren said. “The track got rough and challenging but I had a lot of fun racing. A freak issue happened in the first moto while I was running fifth, but my start was good and my riding felt great. Having 39th gate pick in the second moto, I did my best to get off the gate good. I think I was somewhere around 12th after lap one. My riding and starts were good.”

Team Manager Jeremy Albrecht added: It was a decent day. Alex rode well and had speed to be on the podium. Noren rode good and Joey had consistent finishes but is still just needing to be a little more comfortable. The track was great and high-speed so we learned some things and feel Monday will be better.”

Martin’s moto one start put him just outside of the top 10, but he quickly fought into and finished in a single-digit position. Moto two proved more challenging, but ‘A-Mart’ pushed into the lead group and finished the day’s racing inside the top 10, allowing him to maintain a top-five position in the points.

“The second Red Bud was a tough one for me. Starts were really important as everyone was really close in speed,” said Martin. “My starts were sub-par, and some mistakes and a crash didn’t help the cause. I’m going to regroup and come out swinging at the hometown race.”

Savatgy started the day by laying down the fastest lap time in the first qualifying session, which turned out to be the second fastest qualifying lap time overall. In moto one, he battled inside the top 10 throughout the 30-minutes plus two-lap race. In the second moto, he was second at the holeshot stripe; he held firmly in third position until a tumble over 10 minutes into the race set him back to seventh. Savatgy’s moto results netted him seventh place overall for the day and the weekend’s efforts climbed Savatgy up two positions in the season points standings.

“For Red Bud 2 we made some changes to the bike and overall it got better,” Savatgy said. “My starts were good and I rode well, I just had a little issue in the first moto and a small crash in the second moto while running third. My speed is getting better and I’m excited to have a week off to work on some things to get ready for Millville.”

Noren kicked-off the racing with a top-10 start right on the rear wheel of Suzuki teammate Savatgy. He put in strong rides for both motos, ultimately leaving the Michigan track one position higher in the season points standings.

“It was not at very good Red Bud 2 for me.” Noren explained. “My riding was pretty good but I struggled to make passes and also fell in both motos. I know what I need to work on so it will be good with a weekend off to regroup and come back strong for Millville.”

Said Team Manager Albrecht: “Alex rode hard but did not get the finishes he needed. The highlight was that he did the leap at the end of moto one when not many 250s could make it. Alex is still in the fight so we will keep working to come back strong at his parents’ track in Millville. Joey had better speed and a great start in moto two. It was good to see him running third for a while until going down. Freddie was riding good in both motos but had some mistakes. He went down battling for a top 10 in moto one and in moto two he made a mistake while running ninth.”

The Lucas Oil Pro Motocross series takes next weekend off, then the riders are back to a Saturday schedule re-starting on September 19th at Spring Creek MX Park in Millville, Minnesota, where the JGR Suzuki team will be charged up and ready to bring in more strong results for the Suzuki brand and climb further up the rankings in 2020 motocross racing.