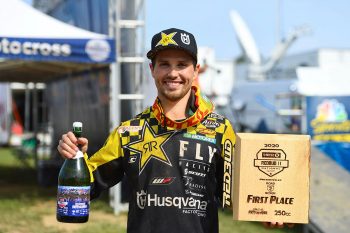 Just three short days after going to battle at RedBud MX for Round 4, the Rockstar Energy Husqvarna Factory Racing Team returned to racing on Monday for Round 5 of the 2020 AMA Pro Motocross Championship, rounding out the series’ first doubleheader weekend in Buchanan, Michigan.

RJ Hampshire proved that consistency is everything in the 250MX Championship as he scored a pair of podium finishes to claim the overall victory amidst a chaotic day of racing. In the 450MX class, Zach Osborne successfully managed his championship points lead with a third-place podium finish to extend his lead to 28 points as the team enjoys a well-deserved weekend off before heading into the second half of the series.

450MX
In Moto 1, Osborne got off to a good start as he settled into second early on. He chased after the leader for a majority of the race before being joined by a hard-charging group of riders from behind. He diced back-and-forth in the final laps to ultimately finish just off the podium in fourth. In Moto 2, he powered his way into second off the start and he once again went to work reeling in the race leader, who made a mistake and allowed Osborne to get by on lap 10. Osborne led for two laps before getting passed by Blake Baggett and from there, he finished strong to secure second in the moto and third overall for the day.

“I didn’t qualify that great but I was able to take two good starts and go 4-2 for third overall and extend my points lead a little bit,” Osborne said. “I can’t thank the team enough for all of their hard work and we’re happy to get through this doubleheader weekend healthy and strong.”

Dean Wilson finished just outside the top-10 overall in the 450MX class with a pair of consistent 11-11 moto scores. After five rounds, Wilson sits 10th overall in the class championship.

“The two RedBuds have been kind of a struggle for me,” Wilson said. “I have a bit of a knee injury and I was off the pace for both rounds here but at the end of the day it’s not an excuse and I know I need to be faster and I need to be better. I’m glad to be safe and move onto the next round at Millville.”

Team rider Jason Anderson is expected to miss at least the next few rounds as he underwent surgery on Thursday morning to remove previous hardware in his arm following a re-aggravation of it at Round 3.

250MX
In Moto 1, Hampshire got off to a third-place start and he settled into the podium battle early on. He maintained a top-three position through the first half before finally making for second on lap nine. From there, the race leader made a mistake and went down leaving an open track for Hampshire to assume the lead. With two laps to go, Hampshire made a small bobble that sent him off balance and he dropped into second, where he ultimately finished. In Moto 2, he grabbed another top-three start and battled up front throughout the entire 16-lap race. He overtook second just after the halfway mark but he was passed back on the final lap to ultimately secure third in the moto. Hampshire’s 2-3 finishes were enough to earn top honors for the day as a first-time overall winner in 2020.

“I got off to two pretty good starts today, which was nice. I should have had that first moto win but I made two mistakes late and it cost me huge,” Hampshire said. “I pulled it together in the second moto and I’m so stoked. Huge thanks to this whole team, this is the first overall for me in about two years, so it’s special. We’ll celebrate and hopefully rack a few more before the season is over.”

Rookie Stilez Robertson started just inside the top-15 in Moto 1, working his way up to eighth by the halfway point. He maintained a solid pace to finish ninth in the first race. In Moto 2, Robertson started in 15th and once again made a charge to a top-10 battle mid-way through the race. He collided with another rider while passing for 10th, which dropped him back to ultimately finish 18th in the moto and 13th overall for the day.

“Today was pretty good,” Robertson said. “In the second practice I qualified fifth, which is my best to-date. I’m going to work on getting better starts and staying up front.”

Jalek Swoll added some more points to the board with a 19th overall, finishing 23-15 on the day.

“In the first moto, I got a pretty good start but I lost my front brake and didn’t realize it until it was time to stop for the next turn and that took me down and left me dead last from the beginning,” Swoll said. “In Moto 2, I didn’t get a good start and I could only get up to about 15th. It’s not what I wanted but we got a weekend off and I’ll put in some work and get to it at the next round.”