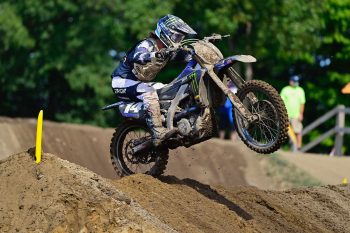 Monster Energy Star Yamaha Racing’s Dylan Ferrandis fought back from difficult starts to end the day second overall with a 5-2 result, regaining some points in the Lucas Oil Pro Motocross 250MX Championship at the RedBud National II. Teammate Shane McElrath got the win he was looking for in the first moto but had to charge through the pack for a 10th-place finish in Moto 2 to repeat Friday’s third overall. Justin Cooper had a solid day finishing seventh overall with a 7-5 tally. Ty Masterpool once again impressed with a pair of great starts, but a few errors resulted in eighth overall (4-13).

In qualifying, the team came out swinging with all four riders at the top of the timesheets. Although this time around, Ferrandis was second to his young teammate Masterpool. After a crash Friday in the first moto, the back-to-back 250SX West Champion did not feel 100 percent, but that didn’t mean he wasn’t putting in a full effort.

Ferrandis found himself 13th at the start in the first moto and had to work his way forward. He passed his teammate Cooper for seventh on lap four and then pursued his title rival, Jeremy Martin. In the heat of the battle, the pair came together a couple of laps later. Ferrandis quickly rejoined and moved up to fifth in the final moments of the moto. At the start of Moto 2, he found himself in 13th again, but as the laps wore on, the Frenchman started to gain momentum and worked his way into third. On the final lap, Ferrandis made the move to score an important runner-up finish for second overall and regained three points in the title chase.

By comparison, McElrath’s motos were at opposite ends of the spectrum. The North Carolinian got off to a great start, fighting a close battle for the holeshot with Masterpool and coming in second. He lost a position to the competition at the halfway mark but regained the second spot after an error from the race leader, his teammate Masterpool. With two laps to go, McElrath moved into the lead after a mistake from the front runner and was cool under pressure to take his first moto win of the season. Unfortunately, he could not pull off a repeat in Moto 2 and was back in 17th after the first lap. McElrath kept pushing and crossed the line 10th to score third overall.

With all of the drama going in both motos, Cooper was steady. He got off to a decent start in sixth both times, and ultimately finished seventh in the first moto and improved to fifth in the second moto for seventh overall.

Masterpool came out swinging in his second race back from injury, setting the fastest time in qualifying and taking both holeshots. The 18-year-old maintained his lead in the first moto until a tip over in the mechanic’s area had him rejoining in fourth, where he ultimately finished. In the second moto, Masterpool was up front again but made an error lining up for Larocco’s leap and was overtaken for the lead. He maintained second until a tip over had him once again in fourth. Unfortunately, Masterpool had another crash a few laps later and finished the race 13th for eighth overall.

The Monster Energy Star Yamaha Racing team gets a weekend off before heading to Millville, Minnesota, for Round 6 of Lucas Oil Pro Motocross Championship at the Spring Creek National, on Saturday, September 19.

Wil Hahn – Monster Energy Star Yamaha Racing Team Manager
“Today was good overall. I think it was more positive than Red Bud I. We’d like to win these races, but Dylan was able to regain some points in the championship, and that’s the bigger goal. Also, Shane winning his first moto of the season was positive too. We’ve got a little more time to work on some things after this doubleheader to come back at Millville.”

Dylan Ferrandis – Monster Energy Star Yamaha Racing
“I gave everything I had for the two RedBud rounds, but my crash in the first moto at RedBud I hurt me. I hit my shoulder and my head, so it was not great for only having two days to recover. It was hard, but I had to deal with that, and we saved some points in the championship.

“Today, in the first moto we had an incident with “J Mart” (Jeremy Martin), which was really unfortunate. I don’t really know what happened. I think this championship is between us two, and we both really want it. So I think it was just a racing incident. In the second moto, I got a bad start again. We are getting a lot of bad starts right now, so we need to figure out what’s wrong. I feel like I’m the problem, not the bike because the bike is really great and the team is doing a great job. We can see that all of our bikes are always in front. So I need to fix that. We have 10 days to recover before Millville. I will try to rebound there.”

Shane McElrath – Monster Energy Star Yamaha Racing
“I would say half my day was really good, getting the win in the first moto, and the second moto was really not good. I spun off the start. It was bad from the get-go. It was super hard to pass out there. I made passes, and then I would get passed back trying to make more passes. I felt like I was just going back and forth with the same guys out there. By doing that, I couldn’t break away. So that was pretty frustrating, but overall, to end up on the podium… I can’t believe I ended up on the podium. So I’m happy about that. I’m ready to keep working for wins, but I can’t be that far back.”

Justin Cooper – Monster Energy Star Yamaha Racing
“RedBud has never really favored me. I was pretty consistent, but it’s not where we want to be. I want to be fighting for the podium and even a win. Until we’re there, I’m not going to be satisfied. It’s just the way it goes. When you do well in the past, you want to stay there. We’re back to work this week. I’m going to work on some stuff and hopefully get some more testing in so that we’re a little bit more comfortable and can go after it.”

Ty Masterpool – Monster Energy Star Yamaha Racing
“The starts have been good. I kind of got the power-to-weight ratio going for me, being 120 pounds. I felt pretty good in the motos. I was running up there. I just kind of made some dumb little mistakes here and there. It’s great to be back racing, and I’m feeling pretty good for getting released to race less than a week ago. I’ve got the speed. I just want to stay up front now and stop making those small mistakes.”