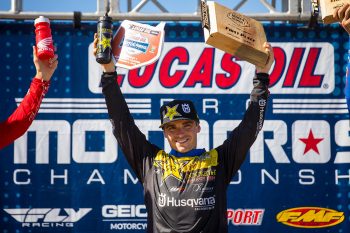 Rockstar Energy Husqvarna Factory Racing Team’s Zach Osborne made a sweeping statement in the 450MX Championship on Friday with an incredibly dominant 1-1 performance at the RedBud I National, serving as Round 4 of the 2020 AMA Pro Motocross Championship in Buchanan, Michigan. His teammate, RJ Hampshire, scored a solid second overall in the 250MX class with 2-5 finishes for the day.

450MX
Osborne came into Friday’s first-ever Pro Motocross double-header with two overall victories under his belt but the 450MX points leader achieved a career milestone when he made it a 1-1 sweep on the way to earning overall-win No. three this season. Osborne maximized all efforts on the racetrack as he claimed the holeshot in both motos before going on to lead all 35 laps of the day. Heading into the mid-way point of the series on Monday, he extends his championship points lead to 26 with five rounds remaining.

“It was pretty much a perfect day for me,” Osborne said. “Two holeshots and wire-to-wire race wins for the overall. I’m really happy with my riding and my fitness, and my bike is working perfectly so I’m looking forward to Monday and the rest of the series.”

Dean Wilson grabbed a top-10 start in Moto 1 and a mistake dropped him back to 14th early on. He fought his way back up to ultimately finish 12th in the first moto. In Moto 2, Wilson got off to a decent start and he battled just outside the top-10 early on. He maintained a solid pace to finish 11th in the moto, taking home 11th overall for the day.

“I came in a little battered and bruised from last week’s crash and the effects afterwards were definitely a lot worse than I thought,” Wilson said. “I pushed through the day and ended up 11th, which is not great but all we can do is heal up a bit and come in on Monday better.”

Team rider Jason Anderson is expected to miss at least the next few rounds as he underwent surgery on Thursday morning to remove previous hardware in his arm following a re-aggravation of it at the last round.

250MX
In Moto 1, Hampshire got off to a 10th place start and he climbed his way into the top-five by the halfway point. Sitting in fourth, Hampshire stalked the podium battle ahead and he charged into third by lap 11. With another valiant push in the final laps, Hampshire overtook second with three laps to go and he finished strong in second with a great come-from-behind performance. In Moto 2, he started off in seventh and worked his way up to fourth about six laps in. He chased after the podium battle for a few laps before getting passed to ultimately finish fifth in the moto. Consistency paid off for Hampshire as he was able to secure second overall with 2-5 finishes.

“I didn’t have great starts in either moto but I had good speed and the bike was working good,” Hampshire said. “We made the right call first moto with the tire and I had probably one of my better motos I think I’ve ever had. I’m stoked on a 2-5 for second overall. The team and I seem to be doing pretty well together so we’ll keep chipping away and take it race by race.”

Rookie Stilez Robertson finished just outside the top-10 in 13th overall following a consistent pair of 13-14 finishes in only his fourth pro class appearance.

“In the first moto, I got a good start and went way too wide in the second turn and just rode super tight all moto,” Robertson said. “In the second moto, I got a bad start and was about 24th around the first turn but I worked my way up to 14th. I rode better but we’re still not where we should be, so we’re going to keep working and try again on Monday.”

Jalek Swoll returned to racing on Friday after missing the last two rounds due to a mild concussion. With combined moto scores of 21-15, Swoll came away with 19th overall for the day.

“Today had its ups and downs,” Swoll said. “The first moto I wasn’t really feeling like myself and then I had a tip-over and finished outside the top-20. I put that moto behind me and the second moto was a lot better. I hung around 10th for about 10-15 minutes and unfortunately got a little bit tired and went back a few positions. I’m looking forward to the next round and getting some positives in there.”