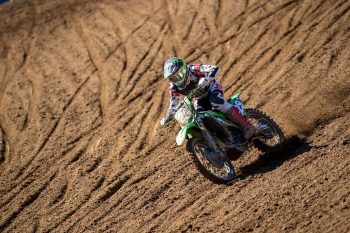 Monster Energy Pro Circuit Kawasaki’s Cameron McAdoo returned to the top-10 after a solid day at the first of two Pro Motocross rounds held at RedBud. He grabbed decent starts and was able to tally 5-7 moto scores on the day. Teammate Darian Sanayei returned to racing after missing two rounds, showcasing great starts on his way to finishing 14th overall with a 10-20. Michigan native Mitchell Harrison didn’t have the homecoming he was hoping for, finishing the day 18th (14-37).

McAdoo has been running with the top riders of the class all season and knew he could take advantage of an unusually edgy RedBud track. The first moto placed him sixth at the start and he continued to work all moto, finishing the 16 lap race in fifth. The second moto was nearly the same start but he had some extra company around him, pushing him back to seventh for the moto, giving him seventh overall.

“It was definitely not the normal RedBud dirt that we are used to here,” said McAdoo. “I am happy with how my starts have been going, but just need a little more intensity to keep the front guys from moving too far away in the early parts of the race. I am fully confident in our bike and team, we’ll be making any needed adjustments to come out stronger on Monday.”

The No. 157 of Sanayei was back on track after missing a few rounds with a shoulder injury. He felt prepared enough to line up and it was obvious he was happy to be back as he nearly grabbed the holeshot in the opening moto. He tried to stay strong, but knew he had to not overdo it and kept a good pace finishing 10th. In Moto 2, he got another solid start, though found himself outside the top 20 by the halfway mark. He held on until the end and finished 20th for 14th overall.

“This track got very rough as the day went on and it was harder and harder to ignore that I wasn’t completely 100 percent,” said Sanayei. “I was very happy with my starts. The Kawasaki KX250 was really a rocket out of the gate and I am happy we could put it up front at the start. I’ll keep working to get stronger and faster, luckily we get another go on Monday.”

Hometown boy Harrison had high hopes coming into the round that he could potentially put his No. 74 on the podium for the team. While the track felt a bit different from its traditional Fourth of July stop, Harrison was happy to be on familiar territory. He got a decent start in Moto 1 where he started 13th, although at the checkered flag he was unable to move forward and finished 14th. The second moto was leaps and bounds better with a spectacular start, holding onto fourth place for the first five laps. On Lap 6, Harrison went down and was unable to continue, forcing him to score 37th and give him an overall of 18th.

“It was definitely not the day I was hoping for,” said Harrison. “I felt good coming into the race, even though there weren’t the crazy fans we love to see on the sidelines. My first moto start wasn’t good and I wasn’t able to make any moves forward. The second moto I was so happy to be up front, but a crash broke some stuff on my bike and I couldn’t keep going. We’ll regroup for Monday and really strive for a finish my hometown supporters can be proud of.”