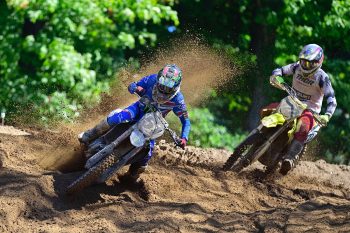 Monster Energy Yamaha Factory Racing’s Justin Barcia proved he had the speed to be at the front of the pack at Round 4 of the Lucas Oil Pro Motocross Championship, overcoming a tough Moto 1 to bounce back and finish third overall (6-2) at the RedBud National I. Teammate Broc Tickle had a good showing at his home track in Buchanan, Michigan, scoring inside the top 10 in both motos to finish ninth overall (8-9).

In the first moto, Barcia got the raw end of the deal at the start, coming around the first lap in 22nd. He was quick to make moves towards the front, into 12th by Lap 4. Fans would never know that Barcia was tired as he put in his fastest lap of the race on the final lap, and made the pass to finish sixth on the moto. His start was much stronger in Moto 2 where he funneled into third and had a great battle for second before cementing his spot in the runner-up position where he finished. Barcia’s 6-2 moto score placed him third overall on the day, and continued to keep him third in the championship standings.

Teammate Tickle has roots in the Michigan area and has earned podium finishes at RedBud throughout his career. While the track was constantly changing throughout the day, Tickle was able to remain consistent. He started the first moto in eighth and settled in to finish in the same spot. Tickle didn’t enjoy the same top-10 start in Moto 2 and was forced to move through the pack, moving up from 14th to finish the race in ninth, giving him ninth overall.

Jim Roach – Yamaha Racing Department Manager for YMUS
“Overall it was a good day on a hard slippery track at RedBud. Both guys started the day with good qualifying results. Justin had a rider fall in front of him in the first moto and had to come back from that crash. Justin was able to get a good start for the second moto and had a nice battle the whole race for second. He was able to maintain and get that second place spot for third overall. It was a nice podium for the team. We’ll be back on Monday with a short recovery, and look to build on our progress and fight up front.”

Justin Barcia – Monster Energy Yamaha Factory Racing Team
“I was happy with qualifying and it was smooth and fast. In the first moto, I got a bad jump and got tangled up with a couple guys. I had my work cut out for me coming from the back of the pack. I passed a few guys on the last lap and that helped a lot. It wasn’t the result I wanted, but a good ride. In the second moto, I got off the line decently and was chasing the leader, but there were a few mistakes that kept me from catching him. The track was brutal. It was different from the usual RedBud. Third place is pretty cool since it could have gone a totally different way. We’ll get a short recovery before getting back at it on Monday.”

Broc Tickle – Monster Energy Yamaha Factory Racing Team
“I was excited to come here. I live close by and consider this my home race. I enjoy the track a lot. Today overall, I felt like it was solid. It was a baby step in the right direction. I was in the mix and just slowly lost sight of the guys in front of me. The second moto, I wanted to do the same thing as Moto 1, but came around the first lap a little further back than I wanted. I was able to get up to ninth and fought hard for that today. The track was difficult. It was not as deep as it normally is and much edgier. I’m looking forward to coming back on Monday. I’d like to get better starts and keep our goal of pushing for that top five.”