Surgery a success after arm causes problems during Ironman National. 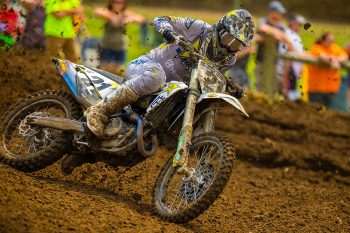 Rockstar Energy Husqvarna’s Jason Anderson will miss the upcoming stretch of Lucas Oil Pro Motocross after undergoing surgery to have a plate removed from his arm.

Anderson pulled out of moto one at the Ironman National after aggravating the injury that ended his Monster Energy Supercross defense last year.

After evaluation by the Alpinestars Mobile Medical Unit, x-ray results discovered that the plate and screws in his forearm had backed off the bone and surgery was immediately scheduled.

“Jason is a tough rider, so when his hand and arm started to lose feeling during the first moto at Ironman, he made the smart decision to pull off and get it looked at,” said Rockstar Energy Husqvarna Factory Racing’s Stephen Westfall.

“It’s unfortunate that he will be out for the next few rounds, but we will evaluate his healing progress and determine if he’s able to return to the Pro Motocross Championship this year.”

Anderson started the season strongly by winning the opening moto of the season and finishing third overall at Loretta Lynn’s 1, however, it’s unclear if he will be fit in time to return by the end of the shortened series.