Nothing signed yet says Barcia amid ongoing 2021 rumors 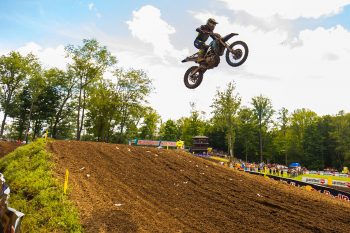 There has been no contract signed by Justin Barcia just yet as rumors mount that he will transfer from Yamaha to GasGas for the 2021 season.

Barcia, who starred at last Saturday’s Ironman National, is almost certain to be departing Monster Energy Yamaha at the conclusion of Lucas Oil Pro Motocross.

The 28-year-old has become the favorite to join a new-look factory GasGas team – the Spanish brand now owned by KTM Group – and it’s understood that Troy Lee Designs will trade its KTMs for GasGas equipment from next year with a single 450 and two 250s.

However, Barcia said this week that he is yet to sign a contract for 2021, instead focusing on the 450MX championship, where his stocks have been rising across the opening three rounds.

“There’s nothing to really share at this point,” Barcia stated. “All as I can do is go out there and go as fast as I can, put myself in the best position to get a good ride for next year. No, I haven’t signed anything, just trying to focus on this championship. I haven’t felt this good on the bike in a long time, so I just need to focus on the now and worry about the later, later.”

Aside from his GasGas links, which have been previously reported by PulpMX and Racer X, Barcia had also been linked to the Penrite Honda Racing team as it aims to expand to 450SX from 2021, in addition to MotoConcepts Honda.

With Barcia due to depart and Aaron Plessinger on a multi-year agreement that will continue into next season, Yamaha’s factory team could be operated by Star Racing, which should retain Dylan Ferrandis as he moves into the premier class and potentially Malcolm Stewart on a Supercross-only deal.