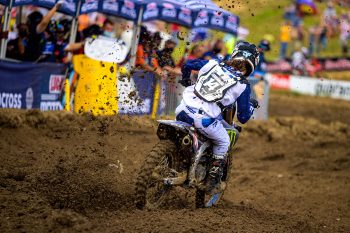 Current 250MX points-leader Dylan Ferrandis intends to discuss the incident with Shane McElrath that led to the Monster Energy Star Racing Yamaha teammates going down in moto two at Ironman.

Ferrandis was left fuming when he said he was blocked by McElrath out of the gates and then being caught up in his teammate’s first turn crash.

The Frenchman, who is title favorite in the 250 Class of the Lucas Oil Pro Motocross Championship this year, said post-race that he will be speaking to McElrath about the clash, but was ‘too mad’ to on Saturday afternoon in Indiana.

“From my point of view, before the corner – for me – we need to talk about it,” Ferrandis said. “I was really too mad to have the conversation with him, so we didn’t have time to talk, but for me, he kind of tried more to block me in the straightaway than to focus on himself and then he crashed after the corner – I didn’t understand why he crashed.

“I was just in his way, so I couldn’t go anywhere. The crash, it’s no problem… I also crash sometimes in the start alone, that’s happened. I was more frustrated about what he did in the straightaway.

“I didn’t understand why he went on the right and blocked me instead of opening the corner and trying to grab the holeshot. That’s something we will have to discuss together. I think we were both not happy about the results, so it was not a good time to talk. It’s something that we will have to do, I think.”

Ferrandis charged back through the pack from last position to salvage third, which secured him second overall and maintained his lead in the standings. He wasn’t certain how high he would climb in a spirited effort.

“When I crashed, I just wanted to get back on the bike as soon as I can,” he explained. “My engine turned off, so I had to restart it – it was so fast I just didn’t think about it. When I finished the race, for sure I didn’t know what I finished.

“I expected to be in the top five, but I didn’t really know, so when I saw my mechanic, I asked him what I finished. When in this situation, what is good to do is just to not panic and don’t think about the championship or what you can do or what you can finish or anything, which is what I did.”