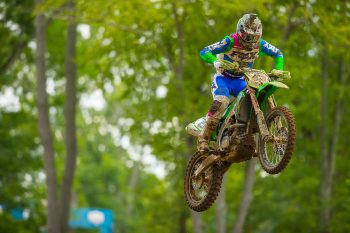 The 23-year-old missed the final rounds of Monster Energy Supercross with fractured vertebrae, setting his preparation for the outdoors back.

Still, after claiming second at Loretta Lynn’s 2, Cianciarulo qualified quickest and found himself third overall on Saturday for back-to-back podium results. He went 3-4 in the pair of hard-fought 450MX motos, leading 25 minutes of the second encounter on Saturday before dropping down the order.

“That’s two weekends in a row where I’ve kind of changed my mindset a little bit, the past couple weekends,” Cianciarulo reflected. “Just trying to be more consistency-based, just kind of doing what’s repeatable and not try to do any miracles out there and go crazy, out of control fast or anything like that.

“So, it’s two weekends in a row now that I’ve had a chance to win. Obviously, it’s frustrating when you have the chance and I can watch the race back now and be like, ‘man, you had five minutes and two laps to go. You couldn’t hold onto it?’ but, really, in the moment, I know that I’m trying the best I can and putting my best effort forth.

“It’s not one of those things that discourages me or anything like that. If anything, I’m encouraged to be up there racing these guys – I just need to be a little bit stronger. To be honest with you, my whole back situation from Supercross has kind of affected my training a little bit.

“I would say I’m still kind of working back into form, as you guys could probably see in that second moto. Those guys put quite a bit of time on me the last five minutes or so, but overall, that stuff is fixable. The speed and the talent, that’s harder to fix, so I’m glad I have that part.

“It’s just all about maintaining a positive outlook, and just keep making steps. I led 25 minutes of a pro 450 national and I’ll take that experience to next weekend and just keep building on it. Physically, I’m probably not where I was at this time last year.

“With about five minutes to go I dropped the anchor and that’s just the way it goes sometimes. I think, for me, I can be technically better, I can be more efficient. I’ve been using a lot of energy at the beginning of the first moto, just kind of being excited. As the season goes on I’ll continue to get stronger and build.”

Despite crashing out of moto two at the opening round, last year’s 250 Class champion has already climbed to fifth in the 450MX standings entering this weekend’s double-header event at RedBud.