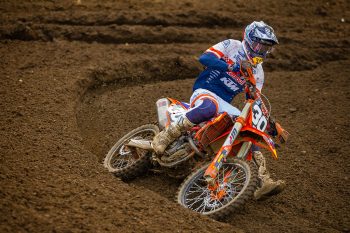 Hartranft’s ride on the weekend further establishes him as one of the most exciting emerging riders in the field and, for him, to capture a result that he’s capable of had added a boost of confidence entering the mid-stages of the outdoors.

“I knew I had the speed to stay with the guys, it was a matter of just doing it, instead of just talking about it,” he admitted. “I put a lot of hard work in during the week, so I just wanted to show… it was just a matter of time where I could show my true potential and today was that day.”

A renowned hard-worker who is still based in California rather than in Florida at the Baker’s Factory, the 22-year-old managed to put himself in good position early during both motos and scored 3-4 results.

“I was kind of complaining to our team just how much effort I’ve been putting in and how good I’m riding during the week and it’s not showing on the weekends,” he continued. “Like, last weekend I went DNF-DNF because of a bike problem, but it’s part of it.

“First moto, I didn’t have that good of a start, but I just kind of rode the dozer marks and just passed everybody – I think I went to third place after the second lap and just tried to tag along with Jeremy [Martin]. Obviously, he’s a veteran and he’s really good, so it was good for me to just follow his lines.

“Then moto two, I knew I could have a good overall finish, it was just I had to get a good start. I about got the holeshot, but I checked up and held it tight and got into fourth and then passed straight into third and kind of just followed Justin [Cooper] and Jeremy, then Dylan [Ferrandis] obviously put on a crazy charge from last.”