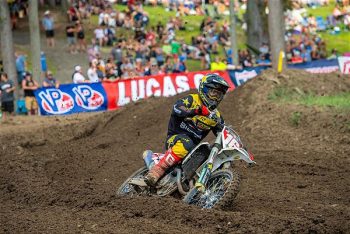 The Rockstar Energy Husqvarna Factory Racing Team travelled to Crawfordsville, Indiana for Round 3 of the 2020 AMA Pro Motocross Championship, where 450MX points leader Zach Osborne scored a Moto 2 podium finish on his way to earning fifth overall at the Ironman National.

450MX
Osborne, the day’s second-place qualifier, got off to a third-place start in 450MX Moto 1. He battled in a podium position for most of the race until he hit a lapped rider and went down, dropping him back a few positions. He was able to re-mount and ultimately finish seventh in the first moto. In Moto 2, Osborne shot off the line to capture the holeshot and battle for the early lead. He settled into second early on and battled with the front-runners all race long to finish strong with a third-place in Moto 2, rounding out the day with fifth overall.

“It was a decent weekend,” Osborne said. “The first moto was a bit of a struggle for me, I just couldn’t find a rhythm from halfway on. The second moto, I was able to rebound and come out with a holeshot and get a third place. In the end, it was a decent salvage and I’ll keep plugging away.”

Wilson came into the first moto a little bruised up after having a big get-off during the first practice session. He grabbed a top-10 start in Moto 1 and battled around there for most of the race. With five laps to go, Wilson made two big passes to ultimately secure eighth. In Moto 2, Wilson started off in seventh and he maintained that position throughout the 17-lap race to secure another eighth-place finish and claim eighth overall for the day.

“The third lap of the first practice I had a big crash and went over the bars, so it was a little rough heading into the motos,” Wilson said. “You have your good days and your bad days, but we never gave up and kept pushing through it. I’m looking forward to just improving every weekend.”

Jason Anderson had a premature ending to his day after experiencing an uncomfortable pain in his arm during the first moto. Anderson pushed through for a few more laps but ultimately made the decision to pull off as he believed it to be a re-aggravation of a previous injury.

“The day didn’t end up the best for me,” Anderson said. “I ended up having a decent practice and then went into the first moto and had a little mishap injury-wise and wasn’t able to finish out the motos.”

250MX
It was a tough start to the day for Hampshire, who experienced a big crash during practice that ultimately set the tone for the rest of the day. In Moto 1, he got off to a top-10 start and he worked his way up to sixth by lap five. He went down mid-way through the race but he battled his way back to ultimately finish fifth. In Moto 2, Hampshire didn’t get the most favorable start as he rounded the opening lap in 14th. He went down a few laps in and as he was fighting back through the field, he found himself on the ground again, ultimately finishing 17th in the moto and 12th overall for the day.

“My day started off with a big crash in practice and kind of spiraled from there,” Hampshire said. “I crashed mid-way through the first moto but I felt pretty good on the bike and was able to come back to fifth. I’m looking to have good starts at RedBud and stay on the bike.”

Rookie Stilez Robertson got off to a ninth-place start in Moto 1 but he came together with another rider and went down, dropping back to 27th early on. From there, he put his head down and climbed through the field to finish 16th. In Moto 2, Robertson didn’t get the best start but he climbed from around 34th up to a 13th place finish, where he secured 14th overall for the day.

Jalek Swoll missed Round 3 due to a mild concussion sustained during the opening round and he hopes to be back to racing soon.