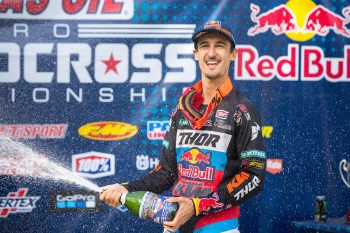 Red Bull KTM Factory Racing Team’s Marvin Musquin enjoyed a second consecutive 2020 AMA Pro Motocross Championship podium after round three of the series at Ironman Raceway, where he clinched a moto win on his way to an impressive second overall.

With comfortable temperatures greeting the 450MX class racers, Musquin, who qualified third, launched from the gate aboard his KTM 450 SX-F FACTORY EDITION in the opening moto to earn the holeshot. The KTM racer took charge right away, maintaining a strong pace around the loamy Ironman racetrack and fending off attacks from the likes of Eli Tomac. Musquin was able to ride consistently and smoothly throughout the 30-minute plus two-lap moto to take an impressive win – his first since suffering a knee injury at this track one year ago.

Having tweaked the recovering knee in a rut in the closing stages of the first moto, Musquin didn’t quite get the start that he would have liked in Moto 2. The Frenchman battled hard to recapture the rhythm he’d enjoyed earlier in the day and was able to cross the line in a solid sixth position to take second overall on the podium. Musquin maintains his second position in the 450MX Championship standings after three rounds in the books.

Marvin Musquin: “It’s huge right now to get a moto win and to be back where I am right now. Even though it’s a second overall and the second moto didn’t go as planned, that first moto was awesome – I was not tired or anything. In the second moto, the start was decent but I was behind the top guys and I knew it would be hard to pass those guys back. I wasn’t riding quite the same as the first moto, so I unfortunately lost the rhythm and contact with those guys – they were on it. Overall, I’m happy. It’s an improvement on last weekend with a moto win and second overall.”