Monster Energy Kawasaki captures first and third at round three 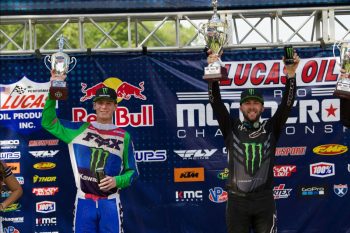 The Monster Energy Kawasaki dominant duo raced their KX™450 machines to the podium after putting in two solid motos at Round 3 of the AMA Pro Motocross Championship as Eli Tomac claimed the top spot on the podium earning his first overall win of the season with 2-1 scores and teammate Adam Cianciarulo grabbed his second consecutive podium with third overall (3-4). In the 250 class, Monster Energy/Pro Circuit/Kawasaki rider Mitchell Harrison earned ninth overall (11-8) and Cameron McAdoo finished 13th (9-15) on the day.

After brutal weather during the first two rounds of the series, Crawfordsville, Indiana brought kinder conditions for the riders. At the track where Cianciarulo wrapped up his title hunt just over a year ago, the reigning Pro Motocross 250 class champion kicked off the day at Ironman Raceway by using that nostalgia and track knowledge to qualify fastest for his first time in his Pro Motocross premier-class career with a lap time of 2:09.464, while Tomac eased into the day qualifying 13th after not being able to get a clean lap in during the qualifying sessions.

Looking for redemption after the tough stretch at Loretta Lynn’s Ranch, Tomac wasted no time as he soared out to second place as the gate dropped on Moto 1. Meanwhile, Cianciarulo found himself pinched between two riders and started outside the top-10 before quickly blasting through the field and making his way up to fifth by the end of the first lap. Tomac hounded the leader throughout the moto, throwing down heater laps, some even two seconds faster than the leader, but the defending champion remained in second at the checkered flag. Cianciarulo capitalized on some of his rival’s mistakes, which allowed him to make the pass for third where he would go on to cross the finish line.

The final moto of the day saw both Kawasaki motorcycles out front as the gate dropped with Cianciarulo nearly grabbing the holeshot in second and his teammate Tomac right in the top-5 mix. Taking the unpopular, outside lines to get a step up on the competition, Cianciarulo made his pass on the race leader with Tomac hot on their heels in third. Tomac quickly made his way into second and began to chase down Cianciarulo who led the moto for nine laps before eventually getting passed by his teammate. The three-time defending champion, Tomac, captured his first moto and overall win of the season with a 2-1 score and managed to gain 13 points on the championship points leader. Cianciarulo earned his second overall podium with 3-4 scores for third overall.

Tomac and Cianciarulo move into fourth and fifth, respectively, in the championship point standings after their double-podium finish. Kawasaki’s last double Pro Motocross 450 class podium was three years ago when Tomac captured the win and his previous teammate Josh Grant grabbed third overall at the season opener at Hangtown in 2017.

“It was a much better weekend for us out at Crawfordsville. We had somewhat normal conditions, it was still a pretty soft track with lots of ruts. I’d say half of the track was really nice and the other half was soft still and pretty technical. We started off a little slow in practice, but I knew once the track dried out a little, we would be good to go. Grabbing the overall today was huge for us. We’re taking it race by race and doing just what we did today by finishing on top. I appreciate the Monster Energy Kawasaki team for all their hard work this past week, that was a great rebound for us.” – Eli Tomac

“The day started off really good, especially with qualifying fastest. I had a lot of comfort on the bike from the start thanks to the great communication with the team; they really had my KX450 dialed. I kind of blew it off the start in the first moto but I was able to pass what felt like 15 guys in the first lap and finished third. I got a great start in the second moto, which was awesome, and it felt really good to lead some laps. Obviously, the goal is to win each time we get out on the track, but I’m proud of the effort we put out there today. I can’t be too frustrated because I had the speed and I gave it everything I had. I’m so stoked for the entire Kawasaki team. We’ll work to improve on some of those minor things and just keep proving I belong up front and on the podium.” – Adam Cianciarulo

In the 250 class, the Monster Energy/Pro Circuit/Kawasaki riders, like Tomac, took their time to find their rhythm at the beginning of the day due to a track that was still full of moisture as McAdoo managed to qualify 12th and Harrison 18th.

As the gate dropped on Moto 1, it was the No. 74 of Harrison who shot out near the front in third and even ran in second for a moment before dropping a few positions to finish just outside the top-10 in 11th place. McAdoo had his work cut out for him as he was forced to charge from mid-pack to finish ninth place.

Moto 2 of the 250 class saw Harrison once again rocket out front in second aboard his KX™250, while McAdoo found himself tangled up with the Moto 1 winner and a few other riders in the first turn. Harrison battled within the top-5 throughout the moto and ultimately finished eighth, grabbing his second top-10 overall with the Monster Energy/Pro Circuit/Kawasaki team by finishing ninth overall (11-8). McAdoo was determined to make up positions as he charged all the way up from the back to finish 15th, even after remounting from a mid-moto tip over, earning 13th overall (9-15).

“Today was a rough day overall for us at Ironman. I had a bad start in Moto 1 and struggled a bit in the beginning, but I ended up coming through to ninth place. I got tangled up in the first turn in Moto 2 and I was doing my best at charging back, but I ended up falling over again mid-way through the moto, so it was just a bit of a struggle. I’m already looking forward to redemption next week and taking on the doubleheader at RedBud.” – Cameron McAdoo

“Overall, Ironman was okay for me as I started the day off struggling a little bit with finding my groove in qualifying, which didn’t exactly give me the best gate pick. However, in both of the motos, my Monster Energy/Pro Circuit/Kawasaki KX250 just rocketed out of the gate and both times I was fighting for the holeshot. I felt like overall I rode really well and showed the speed to run with that front pack of guys for the first 20 minutes of each race. A couple of the top guys in the class started to catch me both times. The good news is I know what I need to work on next week and I know that I have the speed to be up front, so we’re in a good place overall. I couldn’t be happier to be returning back to my home state of Michigan this coming weekend for the doubleheader at RedBud. I’ve had some of my best career rides there, so I am looking forward to returning.” – Mitchell Harrison