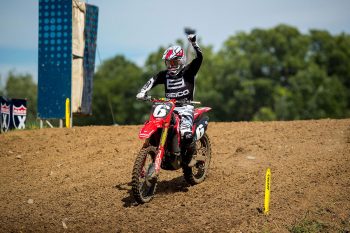 Jeremy Martin’s sensational comeback story continues with a second-straight overall victory in Lucas Oil AMA Pro Motocross, this time containing his first individual moto win of the season. In all, the GEICO Honda team put four CRF250R bikes into the top ten overall of the 250MX class at round three of the series, hosted by Ironman Raceway.

Martin might not have been the fastest rider of the day, but his 2-1 moto finishes were enough to net him the win, as his primary rival Dylan Ferrandis crashed off the start of the second race. Martin controlled the lead with veteran presence.

“Third-fastest qualifier, and then in moto one it was Dylan and I off the gate,” explained Martin. “I got to give credit where credit is due. He was the better man in moto one. I was just trying to do what I could to learn from him at that point, and then I was like, well, we’ll go into moto two and see if we can improve on it. Got the holeshot. I didn’t actually know what happened to Dylan, but I just rode my race and raced forward and managed to gap over Justin Cooper and was able to go 2-1 for first overall.”

Martin credits his life experiences for staying consistent early in the season.

“I would attest a lot of it to breaking my back,” said Martin of the injury from 2018. “The stuff I had to overcome, for me, it opened my eyes up to a whole new world of just how mentally tough I can be. It just kind of like calloused my mind to where I think it’s really helped benefit me from a professional athlete standpoint, being mentally strong.”

“I just wanted to get out two consistent races with no mistakes which I did pretty good,” said the young Australian. “I just had a crash in the first race trying to pass for third, but it’s definitely better than last weekend’s race so I’m pretty happy with it. Really, I just need to get my passing down cause I could not pass even if my life depended on it!”

After a rough first two rounds, Jo Shimoda stepped up his game big time this weekend. He ran up front in practice and then logged 12-7 scores for eighth overall, massive gains over the 16th and 25th from the opening events.

“Yeah I was feeling good from time qualifying and the whole day, I was P2 and P6 in the two sessions and I was able to get a good gate for moto one,” said Shimoda. “Good jump on the start but I got pinched which got me into mid pack, and four laps in I accidentally put it in neutral and fell in the corner and finished 12th. Moto two, good start, I was fourth into the second turn, but, my mistake, I stalled the bike. I started from 12th and caught up to fifth but at the end of moto got passed by two guys for seventh. Still, I’m much happier this weekend. I was frustrated really bad with last two races so approaching into this race I felt much stronger mentally.”

The third team rookie, Carson Mumford, also had a good day with 13-9 scores for tenth overall.

“It was tough for me to learn a new track while it was muddy in the morning,” said Mumford. “I really didn’t even feel comfortable until the second moto when it got rough, then it was really fun and my type of track. My starts weren’t good but I made something of the day. Racing these longer pro races, one thing I’ve learned is that it’s really important to charge every lap with little mistakes. You can’t give up, because there will be guys that are 30-40 seconds in front of you in the beginning of the race and then by the end you’re right on them, where in amateurs the race is normally over in 15 minutes. You just have to keep charging!”

While Hunter Lawrence didn’t log good results for the weekend, with 19-11 scores for 16th overall, it was still a net gain. Lawrence’s shoulder popped out of joint at last weekend’s race, so he was just happy to manage his recovery and avoid more serious damage.

“Yeah mate it was pretty rough,” he explained. “Really, I’m happy to be able to race after last weekend but bummed on the results. We’ll just keep working on the physio and getting the shoulder stronger. Looking forward to next weekend.”

This weekend will pack a double-stack of results, via the first-ever AMA Pro Motocross double header. Riders will take to the famous RedBud track in Michigan on Friday and Monday over the Labor Day weekend.