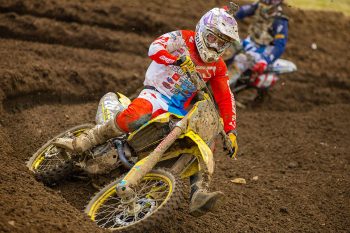 Alex Martin and his Suzuki RM-Z250 used consistency, with top-10 finishes in both motos, to retain his top-three position in the title points, while Fredrik Noren and Joey Savatgy traded top Suzuki RM-Z450 finishes inside the top-10 in each moto; Noren finished stronger in the overall results with points for the day tied with the 10th place finisher.

Martin followed-up his moto win from the previous weekend with a strong late charge in 250 moto one in Crawfordsville, Indiana. His strength late in the race allowed him to gain three positions over laps 11 and 12 and finish right on the rear tyre of the sixth place rider. ‘A-Mart’ dug deep again in Moto Two, turning a mediocre start into a nearly constant advancement. Again he passed three riders late in the race, this time taking three laps to do it. The rides put Martin just one spot shy of a top five result as the chequered flag waved.

Said Martin: “We had some good speed this weekend with a fifth in qualifying. Unfortunately my starts were just not what they should’ve been and I spent all day passing other racers. I was able to salvage a sixth overall and I’m looking forward to Red Bud!”

Noren was looking for another 450 class holeshot in 2020 but settled for a top-five start in moto one. ‘Fast Freddie’ was smooth on the Ironman track that lived up to its reputation of deep, challenging ruts; even with damage to his rear brake rotor, the Swedish rider kept his RM-Z450 inside the top 10 until the finish. He was on his way to a stronger result in the second moto but the track bit him, putting him outside of the top ten despite being the eighth fastest rider by lap times in the moto.

Said Noren: “My speed was good this weekend and I’m excited to continue to work on that as we race on this summer. I had too many smaller mistakes that I need to clean up but my starts were good and the speed is there so we’re looking forward to the next race at Red Bud to improve.”

Savatgy took a hard tumble in moto one that took him out of the race, but he regrouped and came out swinging in moto two. Through the opening corners of the second moto, Savatgy put his JGR-tuned Suzuki inside the top five as did his teammate Noren. ‘Versace’ put in steady laps and kept inside the top ten throughout the race as the track deteriorated and wrapped-up the day with a ninth place moto finish.

“It was a tough weekend for me. These first three rounds haven’t gone according to plan at all,” Savatgy said after the race. “On paper it doesn’t look like much but I am improving slowly. I just need to keep going in the right direction.”

Team Manager Jeremy Albrecht said: “All three guys did well in qualifying and had some good starts. A few mistakes made the weekend not go to plan. Alex went off the track early in the first moto and lost a few spots. In the second moto he had a bad start and pushed hard to finish sixth. Both Freddie and Joey were in good positions before problems in the first moto. Joey had a hard crash and Freddie bent a rear disc. In moto two, Freddie was riding well in the top 10 when he had a crash with only a few laps left. We have a great track coming up this weekend and we’re ready to see these guys do what they are capable of doing on a motocross track.”

The Lucas Oil Motocross series heads into its second double-header of the year with round four on Friday, September 4th and round five being held three days later on Monday, September 7th at the Red Bud MX track.

The JGRMX/ Yoshimura/ Suzuki Racing riders and crew are ready for two days of battle to climb up in the points standing and add to their 2020 Motocross podiums.