Barcia battles back for fourth overall at Ironman National 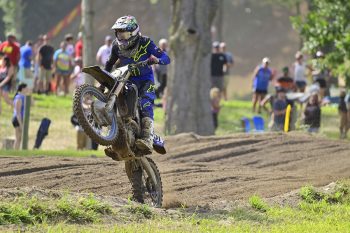 Monster Energy Yamaha Factory Racing’s Justin Barcia blazed his way back to challenge for the win in a thrilling second moto, ending the day fourth overall with a 6-2 tally at Saturday’s Lucas Oil Pro Motocross Ironman National. His teammate also showed good pace, working his way through the pack in both motos to end the day ninth overall (9-10).

Barcia had a good beginning to the day in Crawfordsville, Indiana, qualifying fourth. Unfortunately starts still proved to be a challenge and he found himself back in 12th on the first lap of the moto. He steadily worked his way forward, eventually taking sixth towards the end of the race, but ran out of time to continue his progress.

In the second moto, Barcia got a better start in ninth. He quickly worked his way to fourth and chased down the leaders. He kept the lead pack in reach, throwing down consistently fast times, the lowest average of any other rider – “2’01.395 – over the 30-minute-plus-two-lap moto. The Florida rider was relentless in his pursuit of the win but ultimately finished runner up to the reigning champion. Barcia’s hard-fought second-place finish secured fourth overall on the day, maintaining third place in the standings and closing the gap to 26 points on the points leader.

His teammate Tickle also had a tough time with his starts. He qualified 10th, but in the first moto, the Michigan native found himself all the way back in 27th. Tickle put his head down and had a good pace to thread his way through the pack to finish ninth, putting in his fastest laps towards the end of the race. He made some improvements in the second moto and got a better start, but still had his work cut out for him in 23rd. Undeterred he pushed his way forward to cross the line 10th for a ninth overall finish.

Jim Roach – Yamaha Racing Department Manager for YMUS
“Today was an exciting day at Ironman. The track started off very wet with some overnight rain. It dried throughout the day, so the conditions were constantly changing on the track. Both guys were on pace all day. In Moto 1, they didn’t get a very good start, but they put in some good times and worked their way into a top-10 finish. In race two, the starts were still not the best, but Justin managed to run up front made a solid charge for the lead, and finished second. Broc finished in the top 10 again to end the day ninth overall. We leave here with Justin still third in the points and he closed the gap a little bit on the leader. So overall, it was a good weekend. We’re looking forward to the doubleheader at RedBud next week. Things are rolling right along.”

Justin Barcia – Monster Energy Yamaha Factory Racing Team
“We got a bad start in the first moto but had a good charge to sixth. The second moto was another one of those not so great starts, but the charge was one for the books, for sure. I made a lot of passes on guys and had some great battles. Then the last few laps, Eli (Tomac) and I were up front and I was chasing him hard, but I just wasn’t able to quite get him. It was a really fun race though and I gave it everything I had. The bike worked really well today. The track was awesome. It was really rough. We had deep ruts, slick spots, wet spots… it was a little bit of everything. We needed that to see where the bike was actually at because the first two races were kind of different so you didn’t know what you had. This was a good race to show us that we’re here for the championship and we’re going for it. All in all, I’d say it was a positive day. We’re just going to keep plugging away and try to get some wins.”

Broc Tickle – Monster Energy Yamaha Factory Racing Team
“I’m not 100% happy with my results overall today but I felt like I rode my hardest. We made some changes throughout the day. In the second moto, I was able to push as hard as I could. I really made it tough on myself in both motos by starting way back, the first moto especially. The goal this week is to focus on getting some good starts at Red Bud and throughout the rest of the season. I think I can put myself in a good position in dry conditions if I can do that. I’m a little bummed out because I left a lot on the table by being so far back in the first half of the race, but I’m stoked on my fitness and on the progress we’ve made with the team and the bike. I want to thank them and I also want to thank my sponsors and everybody who has been supporting me over the last three years. It’s awesome to come back and be competitive. It’s kind of a surreal feeling for me.”