Anderson in question after arm pain ends Ironman round 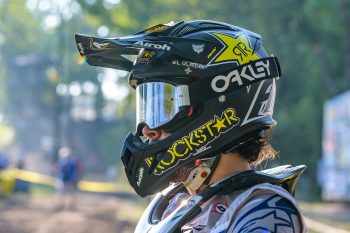 Rockstar Energy Husqvarna has released minor details on the arm issue that put Jason Anderson out of the opening moto at the Ironman National, bringing his day to a premature end at round three of Lucas Oil Pro Motocross.

Anderson, who won the opening moto of the season at Loretta Lynn’s 1, is in doubt for upcoming races after experiencing discomfort with his plated left arm, which happened during last year’s Supercross series.

“Jason Anderson had a premature ending to his day after experiencing an uncomfortable pain in his arm during the first moto,” the team’s report explained. “Anderson pushed through for a few more laps but ultimately made the decision to pull off as he believed it to be a re-aggravation of a previous injury.”

Anderson’s comments within the Husqvarna press release were limited, however, it’s understood that he will undergo further evaluation this week to determine the extent of the existing injuries that sidelined him over the weekend.

“The day didn’t end up the best for me,” Anderson said. “I ended up having a decent practice and then went into the first moto and had a little mishap injury-wise and wasn’t able to finish out the motos.”