Traditional venues an intriguing next step for Cianciarulo 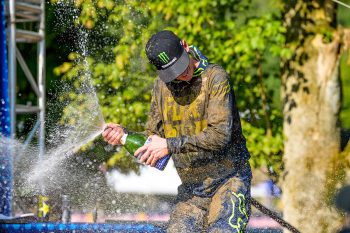 A series of more traditional tracks coming up on the Lucas Oil Pro Motocross schedule have 450MX rookie Adam Cianciarulo eager to see how he’ll fare following a positive start to the season.

After Loretta Lynn’s held rounds one and two, the championship will arrive at Ironman Raceway this weekend and then travel to RedBud for a double-header from next week into the mid-point of the series.

Monster Energy Kawasaki’s Cianciarulo – last year’s 250MX champion – stood on the premier class podium in just his second attempt outdoors and the 23-year-old is confident that he will be a factor on a variety of familiar layouts and conditions moving forward.

“I think everybody kind of knows their condition that they’re probably a little bit better in and where they’ll probably have a little bit better of a chance,” Cianciarulo said. “But, to be honest, now that I have been working on my weaknesses for the past couple of years, I’m yet to kind of figure out what my best conditions are.

“I surprise myself on, it seems like, a weekly basis these days with how I feel on certain tracks and in certain conditions that I’ve maybe not excelled on in the past.

“So, I think the key is to have an open mind and just do the absolute best you can no matter where you go and don’t limit yourself from a mental perspective. I think I have the talent to win, every weekend I feel I do, so that’ll be the goal.”

After posting a 6-38 score at the opening round for 12th overall, Cianciarulo’s podium in second overall via 3-5 results last Saturday elevated him to fifth in the standings. It’s evident that he would be right in contention if it weren’t for his crash out of the lead in moto two at LL1.

“I’m excited,” he said. “I think I’ve made a lot of progress in outdoors the last couple of years and I felt like I rode really good at the first race. I had a bad start in, I guess it was a little bit drier condition that we had at the first Loretta’s, and I rode through the pack. Again in the mud, I rode good, came through and ended up on the box.

“I think with all the improvements I’ve made, I’m anxious to kind of see where I am under a more normal circumstance and a track that we’ve all been to and ridden in more normal conditions. I’m excited to see where I stack up, I think we’re in a good spot. I mean, the season is young, we have a lot of races to go and a lot of good times ahead.”