Anything possible says Musquin on return from knee surgery

Championship the big picture for Frenchman in outdoor campaign. 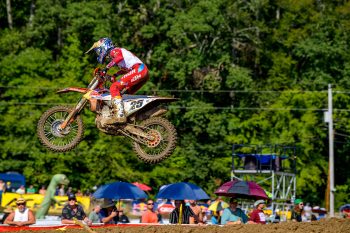 Earning a maiden Lucas Oil Pro Motocross Championship on return from knee surgery would be a remarkable feat for Marvin Musquin, second in points entering Ironman and anticipating a variety of challengers through 2020.

Musquin missed the entire Monster Energy Supercross season after undergoing ACL surgery in December, but has rebounded with strong finishes to open the outdoors at Loretta Lynn’s.

After going 4-5 at the opener for fourth overall, the Red Bull KTM rider qualified quickest at LL2 and then went 8-2 for the runner-up result. He’s second in the standings, 19 points behind Zach Osborne (Rockstar Energy Husqvarna) following two rounds.

“This year I feel like anything’s possible,” said Musquin. “Even though there’s a lot of guys – like I said earlier – that are capable of getting on the podium or winning motos, it’s going to be very open, which is good for the fans and for the racing.

“I’m excited for that, to battle with different guys. I feel like the last few years it was Eli [Tomac], me… and other guys would get injured, so yeah, I think the racing will be better this year – I’m excited. I don’t know how I’m second in the championship right now, with the results I’ve got, but obviously I didn’t DNF a moto.

“It will be key to be consistent, but I want to do more to gain more points, for sure. I’ve done really well, I mean, never won the championship, but I’ve been close the last few years. It’s a bad thing and a good thing, because you want to win and it’s hard when you don’t, when you come up short and you get second or third.”

For Musquin, after finishing second or third every season since stepping up to the premier class, there is only one target for the 2020 season in his bid for a first-career 450MX crown: “I always give my best and this year will be another year of trying to get that championship.”