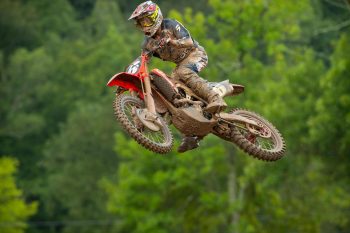 Hurricane Mills, Tenn. (August 22, 2020) – After fighting back from a long layoff and rehab from multiple back surgeries—and fears his career might be over—Jeremy Martin is a racing survivor, and he used those skills to create a consistent run at Loretta Lynn’s Ranch, round two of the 2020 Lucas Oil AMA Pro Motocross Championship. On a muddy, sloppy day that led to bike problems and crashes for much of the field, Martin brought his GEICO Honda CRF250R home with 3-2 finishes in the two motos, enough to score his first overall race win since June of 2018.

“I was like, oh boy. This is going to be gnarly,” said Martin of the heavy rain that hammered the track about 30 minutes before the first moto. “I got halfway down the start straight and I couldn’t see nothing going into the first turn. I’m like, where do I turn? I just had so much water in my goggles and stuff. I went down twice in the first moto. I had one glove off, one glove on, no goggles, and I managed a third somehow. I was pretty blown away. So going into moto two, I just conserved the bike as best as I could. I was like, I hope to God I can make this. Sure enough, I did and I was able to get the overall. Not a win today, as far as a moto win, but got the overall and that was a big deal. It’s been a long road to get back to the top step of the podium.”

With podium finishes in all four motos this year, Martin sits second in the series’ standings, six points away from leader Dylan Ferrandis.

The brutal rain and mud at Loretta Lynn’s did a number on most of the riders in the race, including Martin’s GEICO Honda teammates. The brightest result belonged to rookie Carson Mumford, who was a strong fifth in moto one, but crashed plenty in moto two. He went 5-20 for tenth overall.

“All I did was send it and hope for the best,” said Mumford. “The track was so muddy I couldn’t pick a line. I just held it wide open all day!”

“Timed qualifying went better than usual but I just didn’t find good line to keep momentum,” said Shimoda. “Moto one I was riding good until I crashed after a single, and that broke my front brake. I crashed two more times because of that and really, I was just trying not to get stuck in the mud. Moto two I had a really good start, I was in fourth until the third corner. I actually endoed coming into that corner. I couldn’t get my bike out of the mud for two laps. It was a bad raced and turned into a DNF.”

The mud actually impacted the team’s bikes via a radiator mesh guard, which can come dislodged in a crash, and then leaves the radiator unprotected from the mud. Thus, the bikes overheated, but none of the engines suffered catastrophic engine failure, and were able to be restarted after they had cooled down. Unfortunately, by then, too many laps were lost. The team will work on a fix for the radiator guards.

Jett Lawrence ran into bike problems in both races due to this situation, and ended up out of both races.

“Most people see I am a pretty fun, easy going person but honestly these walks from the track after slugging your guts out through the week and race day takes everything in you to not smash your helmet on the ground or scream in frustration!” said Jett Lawrence. “My mistake was one tip over in each moto, and that popped the radiator protector thingy out which spiked the engine temp. I felt it right away, so I tried to nurse the bike the best I could but the bike overheated. I had two DNFs late in both motos, a lot of work just to end up with disappointing results. That’s what can happen in mud races but it’s so frustrating!”

At least Jett survived the weekend healthy. Older brother Hunter popped his shoulder out of joint while running up front in moto one, which ended his day. He had the shoulder looked at on Monday and found no major damage, leaving him day-to-day. Hunter will attempt to ride later in the week, and will then determine his status for this weekend’s Ironman National in Indiana.